Rep. Kevin McCarthy, the Republican leader in the House, declared early Wednesday morning that the GOP would flip the chamber – even though final results were not yet tallied – and now faces an angry caucus and the possibility of ​his becoming speaker in jeopardy.

“We are expanding this party. The American people are ready for a majority that will offer a new direction that will put America back on track,” the California Republican ​continued, ticking off the races won by GOP candidates.

Republicans had been predicting a red wave in the House and Senate based on historical trends, as well as the nation’s mood over inflation, rising crime and President Biden’s sinking job favorability rating, but the wave failed to gather.

But control of the House and Senate was still hanging in the balance Wednesday, and while Republicans made gains in the House, it was nowhere near the extent of victory many expected.

“The RED WAVE did not happen,” Republican Rep. Mayra Flores of Texas, who lost her election Tuesday, said on Twitter. ​”​Republicans and Independents stayed home.​”

The below-expectation outcome has some Republicans ready to turn on McCarthy.

“‘Knives are out for Kevin McCarthy, if he is under 225, expect Scalise to make a move quickly for speaker,’” Fox News reporter Jacqui Heinrich posted on Twitter​, quoting a source and referring to House whip Rep. Steve Scalise.​

“While many races remain too close to call, it is clear that House Democratic members and candidates are strongly outperforming expectations,” Pelosi said in a statement. “As states continue to tabulate the final results, every vote must be counted as cast.” 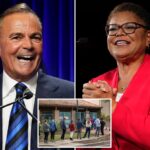 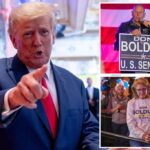