One of two men accused of plotting to attack New York City synagogues is Jewish and the grandson of a Holocaust survivor, his attorney claimed in court Saturday.

Matthew Mahrer, 22, was ordered held on $150,000 bail at his arraignment in Manhattan Criminal Court on charges of criminal possession of a weapon though his lawyer asked that he be released on his own recognizance.

“There are a lot of questions here,” defense attorney Brandon Freycint said of Mahrer, who has allegedly been diagnosed with autism, bipolar disorder, anxiety and ADHD.

“My client is of Jewish heritage. He resides with his parents and his grandfather is actually a 93-year-old Holocaust survivor — and my client is a part-time caretaker,” Freycinet said.

Mahrer and pal Christopher Brown were busted Friday on the Long Island Rail Road with brown carrying weapons and a Nazi armband, according to police sources.

Cops searched Maher’s searched seized a loaded handgun with an extended magazine and a bulletproof vest from Mahrer’s Upper West Side apartment that he and a buddy allegedly planned to use in a synagogue attack, prosecutors said.

Mahrer’s defense attorney, Brandon Freycinet, argued that his client has no criminal history and said he’s of “Jewish heritage.”

But Mahrer had no criminal record and his parents had cooperated with cops, his attorney said. The accused had spent time in homeless shelters before moving in with his parents about a year ago, the attorney added.

“Based on that, judge, my client should not be implicated in anything involving hatred towards his own people and his own religion,” he said.

Assistant District Attorney Emilio Hernandez said Mahrer and Brown traveled to Pennsylvania together and bought the gun “with intent to use it in an attack at a synagogue.”

The FBI and NYPD had been on the trail of Mahrer and Brown, a “diagnosed schizophrenic” who recently told family members that he wanted to go to New York and buy a gun, sources said.

“The parents of this defendant alerted police officers to the existence of a firearm within the backpack of the defendant inside the defendant’s apartment,” Hernandez said.

Prosecutors claimed the pair were aware that police were looking for them and decided to leave the firearm in the backpack in the apartment.

Mahrer’s parents were in the gallery for the arraignment. As the defense attorney spoke of her son, her husband wrapped his arm around her shoulder.

“He’s not what they are saying he is,” his mom told The Post outside the court. His father declined to comment.

Mahrer is due back in court Wednesday.

Brown, 21, is charged with making terroristic threats, aggravated harassment and criminal possession of a weapon, the NYPD said. He was not arraigned Saturday. 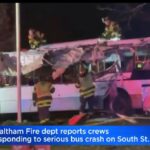 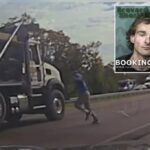