During the Tuesday, December 6, episode, Matt, 61, took a trip without Caryn, 55, to visit his son Zach Roloff and his wife, Tori Roloff, at their home in Battle Ground, Washington.

“Caryn’s cheering me on,” the Roloff patriarch explained. “She’s taken a little half a step back to continue to develop my relationship with all my kids, my grandkids. So I think that’s working for now.”

Zach, 31, also gave an update about where he stands with his father. “When I see my dad, sometimes things can be awkward, but that’s what’s to be expected with where our relationship is at,” he said in a confessional. “Sometimes it’s better to just keep the peace.”

The family reunion took place amid Zach and Matt’s feud over Roloff Farms.

Matt previously said it was his dream to pass down Roloff Farms to his children Zach, Jeremy, Molly and Jacob. After Jeremy’s attempt to take over the property was turned down in 2020, Zach made his own offer in 2021. Fans watched Matt and Zach negotiate during season 22, though the father of three’s offer was eventually turned down.

After Zach and Tori, 31, accepted that they would not be taking over the family business, they moved away from his family in Portland, Oregon, to Battle Ground in October 2021.

The Against Tall Odds author put 16 acres of the property up for sale, which included the home he raised his kids in with ex-wife, Amy Roloff, in May 2022, In Touch confirmed at the time. However, Matt took down the sales listing and revealed his plan to convert the family’s longtime house into a rental property in October.

During the season 23 premiere in May 2022, Zach and Tori revealed they were estranged from Matt and Caryn after the farm was put up for sale.

They speculated that Caryn was involved in Matt’s decision to not accept their offer on the farm. “[Matt and Caryn] still think they have done nothing wrong,” Zach shared during a November 2022 episode.

The soccer coach added, “Like, my dad put her in a situation also where it’s like, ‘You got into family business here.’ Family is always going to be different than when somebody rubs you the wrong way.” 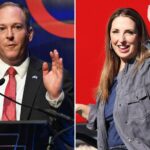 Lee Zeldin won’t run for RNC chair, says fix is in for McDaniel 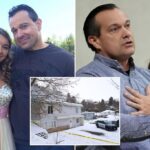