Little People, Big World fans were shocked when Matt Roloff and Amy Roloff announced their decision to divorce in 2015 after almost three decades of marriage. While Amy moved on with real estate agent, Chris Marek, after meeting him at a single’s wine and painting night, Matt’s next relationship would be more controversial. He started a relationship with Caryn Chandler, the long-time manager of Roloff Farms, and things got a little uncomfortable.

“Caryn and I have developed a great friendship over the years,” the Against All Odds author told producers in a confessional at the start of their relationship in 2017. “Her sense of logic and my sense of logic are very compatible.”

The father of four added, “Everybody, I believe, have different people that they jive with at different stages of your life. I have absolutely no regrets looking back over Amy and I’s 26 years of marriage. We outgrew each other in some way, and now, my heart’s open for Caryn.”

Clearly a major adjustment, it took time for all members of the Roloff family to get used to. “Caryn’s a part of the Roloff Farm operation and as far as the relationship goes, I just don’t have anything to say about it,” Matt and Amy’s son Zach Roloff explained in a confessional to producers later that year. “My parents are divorced, so, yeah.”

While the beginnings of their relationship are unclear, Amy claimed in her tell-all book, A Little Me, that Matt was involved with Caryn while the pair were still married. “Matt and our farm manager, who had been working for us a number of years by then, seemed to have more than just a working relationship or friendship,” she penned in 2019. “I saw messages, pictures, and other things that should not have been shared between people who just worked together and were still married to other people. I was devastated.”

Matt seemingly fired back at his ex’s claims in 2019, saying, “You couldn’t be farther [from] the truth” in a comment to a fan who accused him of cheating. Still co-owners of the farm until Matt bought out Amy’s portion later that year, the exes had to keep it cordial not only for their kids but their multiple businesses. “The Matt and Caryn thing, it is what is it,” Amy admitted in an episode in 2017. “It’s a little awkward with someone that works on your farm, is an employee, but is also a friend. It’s like the Twilight Zone. I’m still grappling with that fact.”

Although there has been some major awkwardness between the exes along the way, Matt and Amy have put their past feelings aside and have welcomed each other’s new partners in the family. Matt even helped out with Amy’s wedding to Chris by constructing a new barn just in time for the couple’s nuptials.

As for Caryn and Matt, Matt has revealed his desire for getting on one knee. “Well, that’s coming downstream I hope … ” he wrote on Instagram in 2020. “You never know what might happen next! For now, @carynchandler1 and I are living a very happy and our very best life together … enjoying our kids and my grandkids. A wonderful season of life!” 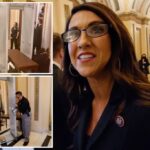 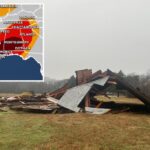