The man who allegedly shot Long Island father Paul Kutz while he was visiting his son at Marist College fired off as many as 30 rounds during the rampage — with the stray bullet striking the doting dad tearing through his heart, lungs and liver.

The suspect entered the Marriott hotel lobby wearing a black ski mask and squeezed off dozens of rounds with a fully automatic handgun at the coffee bar where the victim was struck, according to a newly released indictment.

When the clerk at the Courtyard by Marriott prevented Roy Johnson, 35, from getting behind the front desk on Oct. 2, he pulled out a “loaded, operable Glock Model 17… which had been outfitted with a fixed pin to render it fully automatic,” the document, obtained by The Post, says.

The ex-con began “cursing and yelling” as he sprayed as many as 30 rounds during the rampage, including 22 when he stepped outside the Poughkeepsie hotel.

One of the rounds fatally tore through Kutz’s heart and lungs, breaking one of his ribs, while he was getting coffee during the college Family Day, when the 53-year-old accountant and father of three was visiting his child.

Johnson then put down the weapon, removed his mask and Army green jacket in the parking lot before re-entering the hotel, where he was arrested.

Meanwhile, Devin Taylor, who was at the hotel with Johnson, faces three firearms charges – including one for allegedly possessing a fully automatic rifle with no serial number that had been stored in a guitar case.

Taylor allegedly ditched a Walther pistol behind some bushes in the hotel courtyard before he surrendered.

Police said they found “improvised munitions handbooks,” ammunition, “one model fbg6 flash bang” and a smoke canister in the suspects’ hotel room, according to the indictment.

It also was revealed that an unidentified third party had booked the room for Taylor.

Johnson, who faces one count of second-degree murder and two firearms charges, and Taylor are scheduled for arraignment on Friday.

The suspected murderer was issued an arrest warrant in July by the sheriff’s office in Fulton County, Georgia, after he allegedly skipped court.

He had been scheduled to appear on felony gun and cocaine-dealing charges.

The following month, he was investigated in the Poughkeepsie area as a key suspect in a gang-related murder, law enforcement sources told the news outlet.

Johnson previously did time for robbery and burglary and was released on parole in August 2018, state prison records show. 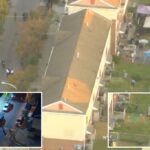 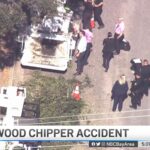 Tree trimmer dies after being pulled into a wood chipper