The passenger who was miraculously rescued in the Gulf of Mexico 15 hours after he fell off a Carnival cruise ship had gotten in trouble for vaping — and was likely drunk when he went overboard.

The 28-year-old man, who hasn’t been identified, was with his sister at the Carnival Valor’s bar at 11 p.m. Wednesday when he took a bathroom break and never came back, the cruise line said.

She only reported him missing at noon Thursday, prompting the Cozumel, Mexico-bound vessel to retrace its path toward New Orleans and the US Coast Guard to launch a search.

Someone on a cargo ship alerted authorities after spotting the man, who was seen in a dramatic video being plucked from the ocean some 20 miles south of Louisiana’s Southwest Pass, with signs of hypothermia, shock and dehydration.

He told his rescuers he wasn’t sure how he’d fallen overboard.

Fellow passenger Whitney Gaines told the Daily Mail that she heard the man’s family taking about him during breakfast the morning after he disappeared.

They talked about how “he kept getting in trouble for vaping in non-designated smoke areas, because there’s only one area where you can really go smoke,” Gaines told the outlet.

“I think they were kind of alluding to the fact that he stepped out to go somewhere,” she said, adding that his family believed he had been drunk before he vanished.

Gaines also told the Daily Mail that the man’s sister said she had been with him a bar.

“She said, ‘He was with me and then he wasn’t,’” the passenger recounted hearing the woman say.

Gaines said one of the ship’s pools was drained, but that no formal announcement was made about a missing person, CNN reported.

Her husband, Mike Anderson, said he saw crew members searching for a passenger and eventually heard announcements about a missing person.

“[I] noticed security starting to search the boat with a photo of the missing [passenger] in their phones,” he told CNN.

Pulse-pounding video captured the man being rescued by a Coast Guard MH-60 Jayhawk chopper out of New Orleans.

“We are beyond grateful that this case ended with a positive outcome,” Lt. Seth Gross, a search and rescue mission coordinator, said in a statement to KPLC.

“It took a total team effort from Coast Guard watchstanders, response crews, and our professional maritime partners operating in the Gulf of Mexico to locate the missing individual and get him to safety,” he said.

“If not for the alert crew aboard the motor vessel Crinis, this case could have had a much more difficult ending,” Gross added, referring to the passing bulk carrier.

In a statement to the Daily Mail, Carnival said: “We greatly appreciate the efforts of all, most especially the US Coast Guard and the mariner who spotted the guest in the water.”

The Carnival Valor also was involved in another case of a passenger going overboard in the Gulf of Mexico.

In February, dramatic video captured a woman being detained on the ship shortly before she reportedly jumped overboard from her balcony during a five-day cruise to Mexico with her husband.

The 32-year-old woman was heard screaming the name “Alicia” as she was being led away. 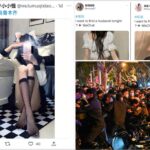 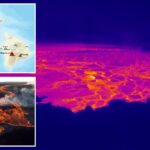