A creep in California was arrested after he allegedly sexually assaulted one woman and robbed another while wearing a clown mask on Tuesday, police said.

The sicko was captured by police after the second attack, where he allegedly stole $500 cash from a woman near an ATM machine on Amargosa Road in Victorville, according to the San Bernardino County Sheriff’s Office.

The victim told police that a man in a white clown mask — resembling the face of Pennywise from the Stephen King movie “It” — and a red sweatshirt had stolen cash from her.

As police drove towards the scene they spotted and detained a man that matched the description given by the victim. He was identified as 22-year-old Joel Hernandez.

Hernandez was found with a backpack that had evidence from the robbery, including the woman’s cash, police said.

During their investigation, police learned that Hernandez had allegedly sexually assaulted a different woman in a separate incident just minutes before the robbery.

The second woman had called 911 and said that she had been sexually assaulted and groped in a supermarket parking lot by a man in a clown mask and red sweatshirt.

Police contacted the second victim who provided a detailed statement and identified Hernandez as her attacker, cops said.

Both victims were in their 50s, KTLA reported.

Hernandez was charged with robbery and sexual battery. He was booked at the High Desert Detention Center. His bail has been set at $200,000. 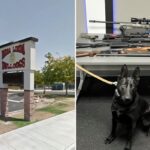 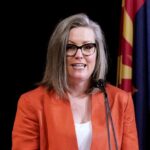