She will always be a ~material girl~. Madonna is known for her strong stage presence and bold sense of style. In the 1980s, the “Like a Prayer” artist set major trends in the fashion world, as fans at the time donned some of Madonna’s signature looks from all-black ensembles to edgy jewelry, and even some sheer outfits! Nowadays, the pop star maintains her unique image with fun color patterns, braless frocks and see-through fabrics.

Over the past few years, Madonna has been showing off her glam via social media. In November 2022, the “Lucky” singer shared a TikTok video via Instagram, in which she rocked a see-through black T-shirt with matching jeans and multiple diamond necklaces.

This wasn’t the first time the Video Music Award winner has stepped out wearing a sheer dress or top. At the 2016 Met Gala, Madonna proudly graced the red carpet wearing a daring black see-through ensemble with thigh-high boots.

After attending fashion’s biggest night that year, Madonna took to social media to describe her thought process behind her head-turning outfit.

“When it comes to women’s rights, we are still in the dark ages,” she began in a lengthy Instagram statement in May 2016. “My dress at the Met Ball was a political statement as well as a fashion statement. The fact that people actually believe a woman is not allowed to express her sexuality and be adventurous past a certain age is proof that we still live in an ageist and sexist society.”

She also emphasized that she has “never thought in a limited way and [she was] not going to start.”

“We cannot effect change unless we are willing to take risks,” the “La Isla Bonita” songstress continued. “By being fearless and by taking the road [less] traveled by. That’s how we change history. If you have a problem with the way I dress, it is simply a reflection of your prejudice.”

Previously, Madonna explained how she makes her fashion choices in a July 2010 interview with Seventeen, noting that style “speaks to who you are.”

“A ‘Material Girl’ is adventurous,” the Michigan native said, referring to her hit 1984 single. “She has a sense of humor and doesn’t take herself too seriously. You want girls to think for themselves and reinterpret things in their own way. When I first came to New York and started making music, I didn’t have a lot of money. I was one of a billion girls walking around New York City, looking for a job and wanting to be somebody. How do you stand out when you don’t have a lot of money? Personal style!”

Based on her past statements and fashion evolution, it’s clear that the League of Their Own star is passionate about encouraging others to embrace their individuality.

Scroll down to see photos of Madonna’s best sheer looks! 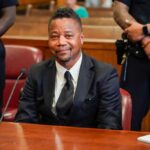 Cuba Gooding ordered to pay $80K to bartender he groped 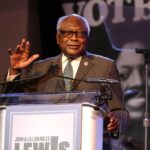 Rep. James Clyburn says US could ‘repeat what happened in Germany’ ahead of midterms