Country singer Luke Bryan on Sunday defended his decision to welcome Florida Gov. Ron DeSantis on stage during a concert to raise money for victims of Hurricane Ian — after left-wing fans freaked out.

The singer released a statement on Twitter after footage emerged of Bryan introducing DeSantis to the crowd during his Jacksonville show on Friday. The GOP governor’s appearance triggered some liberals who proceeded to drag the country star.

“I typically don’t respond to stuff when I’m getting run down on a social platform but here’s the deal,” Bryan, an “American Idol” judge, said on Twitter.

“I understand Governor DeSantis is a very polarizing figure. But I grew up in a country where if a governor ask you if they can come and raise awareness to help victims of a natural disaster you help.

“I’ve generally stayed out of politics throughout my career,” he went on to explain. “I knew people would chatter about this but for me the more important piece was If I am going to come back there a few weeks after a large portion of people have been affected by a natural disaster in a state where people have been good to me this felt right.”

Bryan concluded by saying he would not address the controversy any further and encouraged people to donate to Hurricane Ian relief.

Before Bryan’s remarks, DeSantis expressed his gratitude to Bryan in a tweet Saturday.

“Thanks for letting me crash the party last night, @lukebryan!” DeSantis said.

A video posted on Twitter shows Bryan introducing DeSantis to a loud ovation.

“We’re gonna have some fun and raise some money tonight for the great state of Florida,” Bryan tells the cheering crowd. “Ladies and gentlemen welcome to the stage Governor Ron DeSantis.”

DeSantis then emerges, tossing a few hats and giving a high-five to Bryan as the crowd loudly applauds, according to the video.

Social media users were split over the DeSantis appearance with some criticizing both the first-term governor and country singer while others applauded the two public figures.

One social media user tweeted, “Another country artist I now cross off my list,” while a second user said, “And now I will never listen to Luke Bryan again.”

Others loved the appearance, with one social media user saying, “That’s my kinda night!” in reference to another Luke Bryan song and another user stated, “I don’t know who Luke Bryan is, but for me, the real star is Gov DeSantis.”

“Reminder to all public figures, corporations, etc… Twitter isn’t real life,” she tweeted. “The haters might be loud and well-organized online, but in reality, they are a small portion of the population, especially here in Florida.

“Thanks @lukebryan for helping support Hurricane Ian victims,” she said. 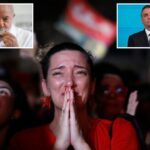 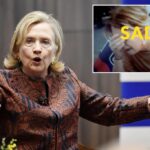