Let’s spot the fakes! MTV’s first reality TV relationship mystery competition, Love at First Lie, isn’t your average couple’s competition because, well, not everyone is a couple. Hosted by actress Tori Spelling, the series will weed out real lovers from those pretending to be in romantic relationships.

“Take a look around you, and trust no one,” the Beverly Hills, 90210 actress warned the cast upon arrival at their shared home.

The 12-episode series follows eight couples who compete for a major cash prize through competitions and successfully send the fake couples home each week. At some point in the show, a group of new couples enters the competition to really spice up the game. Tori hosts a Truth Ceremony at the end of every episode, where each pair votes for one couple they deem as liars. The duo with the most votes gets sent home immediately, but not until they reveal if they were telling the truth or not. If a lying pair gets sent home, $25,000 gets added to the prize fund. If a real couple gets sent home, however, no money will be added to the pot.

Although the participants are competing for the grand cash prize, the series is also a learning experience for those real lovers.

“We all think we’re the ultimate power couple in a relationship,” the Messyness cohost said during an October 2022 interview with New York Live. “Someone that respects each other’s boundaries, truly care about each other and communicate,” she continued. “It was a great journey to see people go through the process. It’s wearing on a relationship, you kind of see it get to each of the couples.”

Speaking of couples, the contestants — who are from the United States and the United Kingdom — were quick to sus out the phonies during the first episode and didn’t hold back on their thoughts.

High school friends turned lovers Riani and Chantz rubbed the group the wrong way as they were sniffing out the frauds in the house. Chantz pointed out salsa dancing couple Yuriy and Alicia’s marriage and questioned Yuriy’s sexuality.

Yuriy shrugged the suggestive comment off of his shoulders after couple Jake and Alfie filled him in on the gossip session. However, the group saw through Riani and Chantz’s lies after they witnessed the most award kiss between the two and sent the pair home.But were they telling the truth all along?

Keep scrolling to see which couples from Love at First Lie are the real deal and who is faking it for the cash prize! 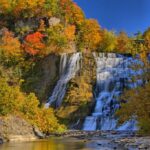 Man drowns after climbing Ithaca waterfall for photo and falling 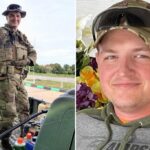