It’s lit to the extreme.

The lights at Minnechaug Regional High School in Wilbraham, Mass., have been on 24/7 for over a year — because the district reportedly can’t shut them off.

The sprawling 248,000-square-foot school’s 7,000 lights were installed over a decade ago on a system designed to save money and energy, NBC reported.

But the software controlling the system failed on Aug. 24, 2021 — and the bulbs have been burning day and night ever since.

“The teachers were complaining because they couldn’t dim the lights to show videos and movies on the whiteboard,” Minnechaug junior Lily DiGrande, 16, told NBC.

DiGrande wrote about the bizarre problem in a November 2021 article titled “What’s Wrong With the Lights?” The question has no apparent answer since the lights remain stubbornly on.

“The teachers now try to get around it by unscrewing light bulbs,” she said. “But the lights seem to be on everywhere in the school.”

Speaking to NBC, Aaron Osborne, the assistant superintendent of finance at the Hampden-Wilbraham Regional School District, acknowledged the light debacle was a major inconvenience to teachers – and a taxpayer money drain.

“We are very much aware this is costing taxpayers a significant amount of money,” he said, though he noted the system’s efficient fluorescent and LED bulb meant the final bill came out to “thousands of dollars per month on average, but not in the tens of thousands.”

Unimpressed with the district’s efforts to fix the lights, Wilbraham’s town selectmen last August issued a letter demanding a solution.

“The image it projects is one of profligacy in a time when many families in the communities the District serves are struggling with their own energy costs,” they wrote of the lit-up school.

“This issue may be one of lesser cost or importance in the overall operation of the District, but it is, unfortunately, a visible one.”

Osborne and School Superintendent John Provost responded with a letter of their own, disclosing the district already got an estimate from Reflex Lighting Group “in excess of $1.2 million” to replace the system.

After struggling to come up with a more economical option, the administration compromised with Reflex on what Osborne described as a “‘piecemeal’” approach, NBC reported.

Parts for the project – which would replace the lighting server, control boards, and other hardware – were ordered in November 2021, with the work set to begin in February.

Supply chain issues, however, delayed the project for months. An Oct. 14, 2022, delivery date came and went, and by the holiday season the district was still waiting for the necessary equipment.

“The final lighting system transition did not happen over break as expected because our vendor contacted us on the last day school was in session to reschedule the transition work,” Osborne wrote to the Hampden-Wilbraham Regional School Committee on Jan. 3.

“This was surprising and disappointing to us: we had this date locked with Reflex since October.”

Osborne told NBC the new plan is for Reflex to begin the work in February, but “we are pushing to do it sooner.”

He also defended the decision to forgo the more expensive plan in favor of less invasive solution.

“We could have accepted the $1.2 million bid to rip the system out and start over right away, but I suspect we would find ourselves in the same position,” he said.

“As I see it, there wasn’t an alternative.”

Paul Mustone, president of Reflex Lighting Group, told the outlet the parts had arrived from China and the company was set to begin work next month.

“I have been doing this for 42 years and I have never seen this kind of supply chain disruption,” he explained, noting the pandemic essentially shut down their suppliers in China.

The new system will comes with all the essentials, he said, noting: “There will be a remote override switch so this won’t happen again.” 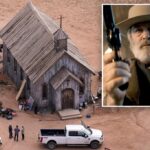 Alec Baldwin could face 5 years in jail over ‘Rust’ shooting 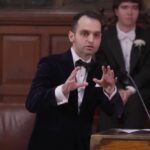