A famous sword swallower was hospitalized with life-threatening injuries after an incident during a live performance at Six Flags left him with a pierced esophagus, liver and lung.

Over a month after the incident and weeks in a medically-induced coma, Scott Nelson, also known by his stage name “Murrugan The Mystic,” is up and talking again and thankful to be alive.

Nelson was about a third of the way through his act at Six Flags America in Washington DC on Oct. 31 when he began to feel unwell following his five-sword swallowing stunt.

“It was really hard to breathe, and it felt like my chest was full,” Nelson told KGTV.

“I knew I was in big-time trouble … I really thought I was going to die,” he said.

Nelson, 59, uses dull-pointed swords that are about a half-inch wide and between 24 and 28 inches long. The San Diego native said that he’s been swallowing swords for over 25 years, and that this is the second “scissoring” accident he’s had.

“I have to keep holding the swords in a bunch. If I let go too soon, that’s when the scissoring happens. I let go too soon, and they rocked off of each other and scissored out,” he said. “Two penetrated the esophagus all the way through. One nicked my liver, and the other perforated my lung.”

Nelson was rushed to a local hospital and underwent multiple surgeries, including having part of his lung removed, before doctors placed him in a coma for nearly a month. When he woke up, a surgeon told him they didn’t think that he was going to survive.

The stunt artist posted photos on social media showing gruesome scars and bruising from the incident and surgeries.

Since his miraculous survival, Nelson said he’s had a “spiritual awakening” and has vowed to never swallow a sword again.

“I won’t be swallowing any more swords. I can never put my mother through this, ever, ever again,” Nelson told KGTV.

However, “The Most Dangerous Man in Show Business” said he will continue performing other parts of his act — such as eating lightbulbs and lying on a bed of nails, he said.

He’s launched a GoFundMe to help assist with the medical costs. He also said he won’t be able to work for three to four months.

“Five Swords scissored out in my abdominal cavity. It also appears that I pierced the lobe of my liver. Good news is, I’ve quit smoking and lost over 50 lbs,” he wrote on the website.

Nelson has appeared as a sword swallower on the AMC series “Freakshow,” ABC’s “Cougar Town,” and CBS’s “CSI: NY.” 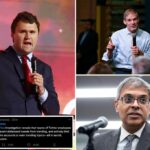 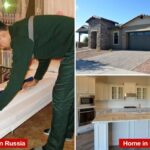 Brittney Griner will sleep great in her Arizona home