The crazed man charged with fatally stabbing two people and wounding six others on the Las Vegas strip was captured on video by a local news outlet soliciting employment outside Los Angeles City Hall two days before the bloody rampage.

Jorge Lopez, a cameraman for NBC Los Angeles sister station Telemundo 52, recorded the man who identified himself as Yoni Barrios on Tuesday saying he had lost his home and all his belongings.

“He kept telling me, ‘I just want an opportunity, I just want to start from scratch,’” said Lopez, who was at the scene on assignment at the time.

The station said Lopez didn’t realize the significance of the video until Barrios was arrested two days later in in Las Vegas, where the Guatemalan national with a criminal record in California allegedly attacked a group of four showgirl performers outside a casino with a 12-inch knife.

He had approached the women for a photo, but one showgirl told police she was uncomfortable with his proposal and backed away.

Witnesses said Barrios charged at the woman and stabbed her in the back as she fled, then allegedly stabbed another woman before running down the Strip and looking for groups of people so he could “let the anger out,” police said.

Authorities said Barrios thought the women were laughing at him and making fun of his clothing, which was described as a long-sleeved white chef’s jacket.

Prior to the attack, Barrios reportedly went to the Wynn casino and asked a janitor about jobs and was also seeking employment as a chef.

Barrios, 32, also told a casino security guard he was trying to sell his knives that he kept in a suitcase to raise enough money to go back home.

The suspect was charged with two counts of open murder with a deadly weapon and six counts of attempted murder in the senseless broad-daylight attack.

He is being held without bail and scheduled to be arraigned Tuesday. 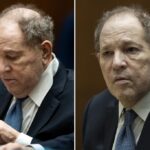 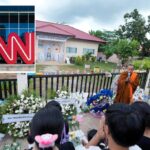