A 17-year-old boy from Los Angeles who drove into a mother walking her baby in a stroller in 2021 — then was controversially handed a light sentence — was fatally shot in California Wednesday.

Kristopher Baca, who had not been publicly identified until his death because of his age, was gunned down in a driveway in Palmdale, a city 10 miles south of Lancaster, the Los Angeles County Sheriff’s Department confirmed with The Post.

A department spokesperson also confirmed that Baca was the then-15-year-old previously convicted in the hit-and-run that sent a Venice mother and her baby flying off the hood of his car.

Luckily, neither Rachel nor her baby were seriously injured. The teen, who had drugs in his system and marijuana in the car, attempted to flee but was rammed by a witness in a pickup truck.

He did not have a driver’s license at the time of crash and was on probation for allegedly spiking a high school girl’s drink.

Baca was sentenced last year to just five months of participation in a diversionary program at a juvenile probation camp, a decision Rachel slammed at the time as too lenient.

“George Gascon doesn’t value my life or the life of my child, or any other victim out there, and would rather reward the monsters like [the juvenile suspect] by demonstrating to them that their actions have no consequences,” Rachel wrote.

Rachel had mixed feelings about Baca’s death when reached by Fox News.

“The universe delivered the justice we weren’t given in court, but a much harsher punishment than he’d have been dealt in a court of law,” Rachel told the news outlet.

The 2021 crash was captured on shocking surveillance footage and showed the moment the mother spotted Baca erratically driving toward her in the wrong direction of a narrow Venice backstreet.

Rachel tried to squeeze herself and the stroller against a property wall as Baca barreled toward her until she realized he wasn’t going to swerve around her.

She can be seen trying to fling the stroller over the car in an effort to save her baby as Baca slams into the pair. Rachel is tossed onto the hood and the stroller flips onto the ground.

Baca had a history of physical fights and had been written up previously for alleged misconduct, disobedience, destructive language and defiance of authority. 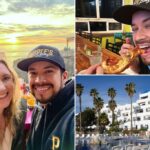 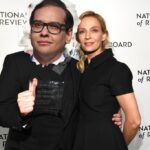