Forecasters at the National Oceanic and Atmospheric Administration believe there is a 75 percent chance that La Niña will stick around through the winter, which will play a significant role in who will see snow and which communities will need to keep their gear in storage for another year.

Historical data shows how strong a La Niña is and can determine which parts of the country will be subject to abnormal weather conditions.

The state of a La Niña is determined by sea surface temperature anomalies in the central and eastern Pacific.

A moderate La Niña has anomalies that range from -1.0 °C to -1.4 °C, and when water temperatures are at least -1.5 °C below normal, a La Niña is considered to be strong.

Depending on whether the La Niña is weak, moderate or strong will have a dramatic effect on snow accumulations, freezing temperatures and all other aspects that accompany Old Man Winter.

Climate forecast models indicate the 2022-23 La Niña will likely stay in the range of either being weak or moderate through the country’s winter.

During a weak episode, the majority of country should expect winter temperatures to be at or below average. Precipitation is usually hard to come by on both coasts, but communities in the Tennessee and Ohio valleys and northern Rockies typically see an uptick in precipitation.

A moderate La Niña tends to lead to warmer weather in the southern half of the country. During these events, freezes tend to be fewer and farther between in the South. Most of the country sees either normal or drier-than-average conditions, which leads to less rain and snowfall. Exceptions include the Tennessee and Ohio valleys, northern Rockies and the Pacific Northwest. These areas historically have seen above-average precipitation when a moderate La Niña is in control.

Here’s a breakdown of the possible winter outcomes for the 2022-23 winter season.

La Niña winters tend to be rather chilly in the region, and precipitation usually becomes a story of the haves and have-nots.

Winter weather enthusiasts need to look no further back than last year to see the impacts of a substantial La Niña.

Many of the region’s ski resorts got off to a slow start due to a lack of snowfall, and there were questions on whether there would be enough powder on the ground to build icy sculptures for a Buffalo Bills playoff game in January.

A mid to late-season blitz by Mother Nature helped many communities recover from snowfall deficits.

Several winter storms in January and February helped propel cities along the I-95 corridor to finish at or above average for precipitation.

A La Niña usually results in temperatures that are well below average in the Midwest. Arctic air never seems to stop invading this part of the country.

Precipitation depends on one’s exact location, but areas of northern Great Lakes are usually in the winter’s target zone.

Most of the Midwest tends to miss out on breaking snowfall records during this type of climate pattern.

Due to its geographic position, Detroit’s snowiest year came during what is considered a La Nada – or neutral year when neither an El Niño or La Niña was in control.

Winters can vary drastically depending on whether a La Niña is considered to be weak or moderate in strength.

A stronger La Niña tends to cause warmer temperatures across the Southeast. It is during these winters that the southern states report fewer freezing temperatures.

Large parts of the Sunshine State can luck out on avoiding a freeze during a moderate or strong La Niña.

When the La Niña is weaker, colder air can make it all the way through the South and into South Florida.

The freezing temperatures can even be significant enough to threaten the state’s sensitive crops.

Most of the region remains drier than average during La Niña regimes except for the Tennessee Valley.

Depending on how weak or strong the La Niña is, parts of the Tennessee Valley usually come out well ahead on precipitation.

Due to the warmer air that is typically present during these events, studies have found tornado outbreaks are more likely.

“Preliminary research indicates that La Niña corresponds to an especially active phase for tornadoes over the Deep South with a relatively high frequency of cold-season outbreaks of EF2 or stronger tornadoes,” the National Weather Service office in Jackson, Mississippi, said.

The combination of an active jet stream, plenty of moisture and a clash of air masses helped produce a record-breaking deadly tornado outbreak in December 2021. The outbreak included a rare EF-4 long-track tornado that flatted parts of Mayfield, Kentucky.

A moderate La Niña during the winter of 2021 – 2022 caused an extremely warm December, with hundreds communities that reached the 70s and 80s. Many southern states reported experiencing their warmest December on record.

More than 94 percent of the West is experiencing drought conditions that range from abnormally dry to exceptional, but for most, a La Niña means a continued dry weather pattern with a few exceptions.

Past moderate La Niñas have resulted in record rainfall events for the Pacific Northwest.

The status of the La Niña does not make a difference for California. The state usually sees drier than normal conditions. 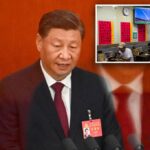 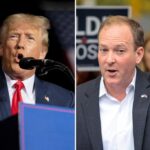