Thank you, next! Kim Kardashian had some fun singing along to an Ariana Grande song on TikTok amid Pete Davidson’s brewing romance with Emily Ratajkowski.

The Kardashians star, 42, lip-synced to the holiday hit “Santa Tell Me” with her eldest daughter, North West, on Monday, November 15, who seemed a little taken back by her mom’s joyful demeanor.

Does this mean Kim is officially part of the “BDE” exes club with the former Nickelodeon star? The slight shade happened the same day Life & Style reported that Emily, 31, is “definitely into” Pete, 28, and hopes they can “fly under the radar.”

“They were spotted having a romantic dinner together,” the insider explained, referring to fans who spotted the duo holding hands in Brooklyn. “They met up through mutual friends since they travel in the same circles in New York.”

Kim and the former SNL star ended their nine-month relationship in August. Multiple sources told Life & Style that they “amicably split” and fans had hopes that they would rekindle their love.

However, his sights are clearly set on EmRata. The model is also newly single after she filed for divorce from estranged husband Sebastian Bear-McClard in September after four years of marriage. The Uncut Gems producer allegedly cheated on the “My Body” author “multiple times” throughout their marriage, an insider told In Touch in August.

Although both Ariana, 29, and the SKIMS founder have previously dated Pete, the women have always remained friendly with one another.

The “Positions” songstress gifted Kim with a PR box from her R.E.M. Beauty line in March, during the height of the reality star’s relationship with Pete. The KKW Beauty founder shared a picture of the PR package to her Instagram Stories and tagged Ariana, to which she reshared the post.

The upcoming Wicked star married husband Dalton Gomez in May 2021 in a private and intimate wedding ceremony at her Montecito estate. “5.15.21,” Ariana captioned her Instagram post alongside stunning photos of the big day. Although the “7 rings” artist shared snapshots of the special day with her fans, she has kept her marriage under the radar and out of the spotlight.

Before she said “I Do” to the real estate agent, however, she was set to marry Pete after the pair got engaged in June 2018. She even got an ankle tattoo honoring his late father who died on 9/11. Their whirlwind romance came to an end that October, which led her to feature the Staten Island native in her iconic song, “Thank u, next.” 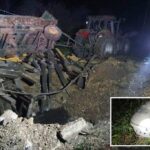 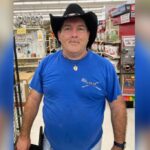