A shocking split. Country star Kelsea Ballerini and husband Morgan Evans announced they were breaking up in August 2022, nearly five years after they tied the knot. Fans of both musicians were saddened by the news, with Kelsea admitting on social media at the time that it was “difficult to find the words” to express what she was going through. The ex-couple’s divorce was finalized on November 3, 2022, but why did they break up in the first place? Keep reading to find out.

Kelsea filed her divorce documents in Davidson Country, Tennessee, in August 2022, citing “irreconcilable differences” as the reason for the split, according to court documents obtained by In Touch. The “Hole In The Bottle” singer took to social media to announce the news to her followers. “Friends, I’ve always tried my best to share my life with you in a real and vulnerable way, while also protecting layers of my personal life as they unfold. This is now public record so I wanted you to hear from me directly that I am going through a divorce,” Kelsea wrote on her Instagram Story. “This deeply difficult decision is the result of a journey of love, growth, and effort that ultimately has come to an end.”

The “Love Me Like You Mean It” singer had used her social media to share both personal and professional updates with fans, but followers had noticed the lack of her husband’s presence in the months leading up to the sad announcement. In the immediate aftermath of her personal news, the singer took to Instagram again with a solemn yet hopeful message: “Right where I’m at with what I have.”

Kelsea and Morgan settled their divorce about two months later, working with individual attorneys to come to an agreement. The settlement further “restored” Kelsea’s “right and privileges” as a single person.

Did Kelsea Ballerini and Morgan Evans Have a Prenup?

Kelsea and Morgan signed a prenuptial agreement ahead of their 2017 wedding, and their divorce closely followed the previously agreed upon terms, according to the court documents obtained by In Touch. Upon the settlement of their divorce – which was “not otherwise altered or amended” from the prenup – Kelsea and Morgan agreed to a specific set of terms for the separation of their assets.

Kelsea Ballerini and Morgan Evans Moved Out of Their Nashville Home

The divorce settlement showed that the couple’s Nashville home was vacated amid the separation and has since been put on the market. Both parties are required to keep the property in good condition during the selling process so as to not deter “potential buyers.” Once the home is sold, Kelsea and Morgan will split the profits equally after the mortgage, real estate commission and additional costs are settled. As far as home furniture is concerned, Kelsea and Morgan split the furnishings between them, with Kelsea taking any remaining pieces left behind by her ex.

Kelsea Ballerini and Morgan Evans Divided Their Assets Down the Middle

Kelsea and Morgan’s divorce settlement addressed everything from health insurance to attorney’s fees, and the couple continued to divide their assets down the middle. The dissolution agreement detailed that any cars, bank accounts, retirement funds, life insurance policies and more – owned by Kelsea or Morgan individually – would remain in their names. The former spouse would not have any claim to aforementioned assets, the document details. The country music star and her husband further agreed that any personal or credit card debt belonging to their former spouse would be taken care of separately.

Perhaps one of the most consequential changes came in terms of Kelsea and Morgan’s beneficiaries – both were removed from any document or policy in which they were listed as their spouse’s beneficiary, such as insurance policies, wills, retirement benefits and bank accounts.

Are Kelsea Ballerini and Morgan Evans Friends Following Their Split?

Both Kelsea and Morgan have been relatively tight-lipped following their separation and divorce, but it’s clear from their music that they’ve handled the aftermath differently. Fans noticed during a September 2022 concert that Kelsea changed a lyric in her song, “What I Have,” to reflect her post-divorce status. Altering the original lyric “I got a warm body in bed” to “I got my own body in bed,” concertgoers quickly picked up on the shift and applauded the singer’s choice.

Morgan, on the other hand, may not have been so quick to change his tune. His October 2022 release entitled “Over For You” reflected a heartbroken lover who didn’t understand the extent of his partner’s strife. Lyrics from the ballad include, “How long have you been waiting to take our pictures down?/How long have you been breaking? … How many times did you say you loved me when it wasn’t true?/I’m just wondering, how long has it been over for you?” They say that music speaks when words fail, and if these lyrics are anything to go by, Kelsea and Morgan are in two very different places following their divorce. Keep scrolling for a timeline of the couple’s relationship. 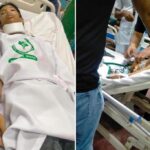 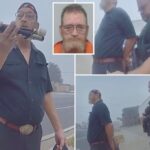