Slain University of Idaho student Kaylee Goncalves is seen in newly released police video speaking to cops after neighbors complained about noise — three months before she and three roommates were brutally murdered at the house.

The 21-year-old is seen in bodycam footage, obtained by Law & Crime, opening a sliding glass door and greeting Moscow, Idaho, officers on Aug. 16.

“Hi, guys,” Goncalves says and confirms she lives at the six-bedroom off-campus home at 1122 King Road, where loud parties had led to noise complaints.

“Know why I’m here?” the officer asks her.

“I assume noise,” she replies.

The cop tells Goncalves that he has “nothing against having a party [but] once neighbors start calling in, then we have an issue.”

“Once I have neighbors calling in, you’re disturbing the peace,” the cop says. “Nothing against having parties, having people who are overage to drink, but again, once we start disturbing the neighbors we have an issue.”

He gives her a “verbal warning,” noting that tickets could cost $300 to $400 for a first violation.

“So I’m gonna grab your info and if I have to come back here, a $300-something ticket is coming your way,” he adds. “I’d much rather you spend that $300 on beer or something fun rather than a noise ticket.”

He then thanks her and wishes her a “good rest of your day.”

“Thank you, you too,” Goncalves replies and heads back inside after the brief interaction.

Police then returned to the home a few weeks later on the night of Sept. 1 after another nose complaint from a loud party.

In a video posted by the true crime YouTube channel “Truth and Transparency,” a man tells cops that the residents had left for another party.

The officers later manage to contact one of the other slain students, Madison Mogen, 21, who tells them on the phone that she was “so sorry for the inconvenience.”

Just months later in the early hours on Nov. 13, Goncalves and Mogen were stabbed to death along with her friends Ethan Chapin, 20, and Xana Kernodle, 20.

Criminal justice PhD student Bryan Kohberger, 28, was eventually charged with four counts of murder and one of felony burglary in the heinous crime.

He has not entered a plea and remains in custody without bail pending a court appearance Thursday. 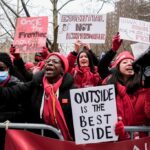 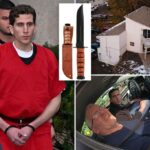 Bryan Kohberger’s ‘amateur’ mistakes which led to his arrest