One of the University of Idaho students slaughtered in the November quadruple homicide had recently moved out of the home where the murders took place, but returned the day before the attack to see her former roommate and attend a party, her parents said.

Kaylee Goncalves, 21, was set to graduate college early, with an IT job lined up in Austin, Texas, her parents, Kristi and Steve, told Dateline.

Goncalves had recently moved out of the three-story home in Moscow, Idaho where she had lived with her best friend 21-year-old Madison Mogen.

“These girls were best friends since sixth grade, like inseparable,” Kristi Goncalves said. “Maddie had been a huge part of our life.”

The grieving parents said that Kaylee had just purchased a new Range Rover, and wanted to show it off to Mogen back in Moscow. She also had plans to attend a nearby party.

“That was the last time that I saw Kaylee,” her mother said.

In the early hours of Nov. 13, Goncalves and Mogen were stabbed to death at the off-campus home, along with Ethan Chapin, 20, and Xana Kernodle, 20.

Bryan Kohberger, 28, a criminology doctorate student at nearby Washington State University in Pullman, Washington, was arrested in Albrightsville, Pa., on Dec. 30 and hit with four charges of first-degree murder when he was returned to Idaho. He potentially faces the death penalty.

A sheath to a Ka-Bar knife that was believed used in the attack was recovered near Kaylee Goncalves and Mogen’s bodies, according to a police affidavit unsealed earlier this month. Kohberger was identified as a suspect by DNA he had left on the sheath‘s button.

The Goncalves told Dateline that they hoped their daughter in the struggle with the assailant had snatched the sheath and played a role in identifying her killer.

“I just said, ‘Can you believe that?’” Kristi Goncalves said, recounting reading the report’s details. “And I said, ‘I hope that maybe a struggle, she pulled it off him, in the struggle or whatever…’”

Steve Goncalves added: “It’s a checkmate type moment. And our girls were a part of it.” 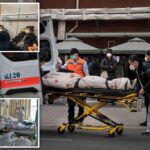 Almost 60,000 died of COVID in China since restrictions eased 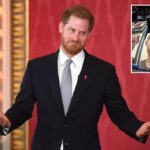