New York Gov. Kathy Hochul was caught on a hot mic Thursday telling President Biden that Democrats ought to try to score partisan points with the bipartisan $280 billion CHIPS and Science Act.

“This allows us to push back at the Republican narrative that we’re tax and spend and not pro-business,” Hochul told Biden after he spoke at an IBM facility in Poughkeepsie — linking the visit to the Nov. 8 midterm elections.

Hochul’s remark came after Biden said “we have to get our heads together.”

Although the bill does give generous support to technology companies working on semiconductors and other high-tech projects, it’s unclear why the governor thought the bill doesn’t count as bigtime spending.

Almost half of Senate Republicans supported the package, but many fiscal conservatives opposed it, especially in the House, because of its price tag, saying it could further worsen four-decade-high inflation and add to the federal deficit.

Biden and Hochul were privately huddling with other Democratic elected officials, including Rep. Sean Patrick Maloney, chairman of the Democratic Congressional Campaign Committee, when the governor provided the campaign talking points.

Biden was visiting the Hudson Valley to celebrate IBM’s plan to spend $20 billion locally over the next decade on research, development and production of high-tech semiconductors and computers and made broader remarks on recently passed $280 billion CHIPS and Science Act.

Biden’s visit also came two days after chipmaker Micron Technology revealed plans to spend up to $100 billion on a massive semiconductor plant in the upstate Syracuse region that the company said will create thousands of six-figure jobs. New York State provided $6 billion in tax incentives to seal the deal.

But Republicans weren’t buying Biden and Hochul’s claims that the Democrats are pro-business, with events coming just weeks before the Nov. 8 election.

“New York has chased hundreds of thousands of jobs out of state with asinine tax and regulatory policies, so it’s comical to hear President Biden, Governor Hochul, and Rep. Sean Maloney wondering on a hot mic if the microchip deal might get them off the hook for years of bad policy choices. It will not,” said state Assemblyman Mike Lawler, the Repubilcan challenging Democratic Sean Patrick Maloney in Hudson Valley’s 17th Congressional Distirct.

“We’re thrilled to have new jobs here, but how about keeping the ones we already have by lowering taxes and cutting regulations? Is that such a hard concept?”

Assemblyman Colin Schmitt, the Republican running against Democrat Pat Ryan in the Hudson Valley’s 18th congressional district, said the exchange between Hochul and Biden shows the president’s visit was a desperate campaign event to prop up Democratic candidates in tough races.

“There are 435 Congressional seats in Congress and 33 days before the election Joe Biden comes to New York This was a hail mary campaign stunt to save the failing Democratic candidates in the Hudson Valley,” said Schmitt, who held a counter event Thursday.

“Voters tell us every day they are fed up with Biden policies on the economy, law enforcement and border security.

Hochul is facing off against Long Island Republican Rep. Lee Zeldin in the governor’s race. 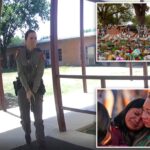