The Kardashian-Jenners have been in the spotlight for a long time, and they’ve even shared some of their regrets, thrills and surprises over the years — including some pretty juicy and NSFW sex confessions.

Kim Kardashian has notably opened up over the years about how she likes to get it on. In a season 1 episode of Hulu’s The Kardashians, the SKKN beauty founder suggested that she was having a great time in the bedroom with then-boyfriend Pete Davidson.

During her marriage to ex-husband Kanye “Ye” West, the Skims founder revealed just how badly she and the Yeezy fashion designer wanted to have more children together after she gave birth to their first child, North West.

In the Keeping Up With the Kardashians season 10 premiere, Kim didn’t hold back in explaining all the gory details to her sisters and even to her makeup artist.

“I’m trying to stall for a few,” Kim said after having a quickie with Ye in the bathroom. “We’ll tell them we’re just putting body makeup on.”

Not only that, but Kim even revealed to sister Khloé Kardashian why she felt the urgency to do the deed with her then-husband. “I was like, ‘I’m ovulating today!’ So, I made him come to my photo shoot.”

However, Kim isn’t the only outspoken one out of her sisters. Khloé has also discussed some details from her sex life, particularly after she became pregnant with daughter True Thompson, whom she shares with ex Tristan Thompson. The former pair also share a son, who was born via surrogate in July 2022.

The reality star even continued her statement on post-pregnancy sex for a man in comparison to a woman. “I’m sure it’s uncomfortable for a man to have sex with a pregnant woman too,” Khloé wrote. “Personally, I get uncomfortable and insecure … you can’t move the same, so you feel useless, LOL.”

Although Khloé might not have so much fun in between the sheets after giving birth, her sister Kylie Jenner and boyfriend Travis Scott beg to differ.

“A lot of people claim that having a baby can hurt your sex life, but I feel like that’s the opposite of our experience,” the “Goosebumps” rapper told Playboy magazine in 2019, to which the Kylie Cosmetics founder agreed.

Scroll through the gallery to see some of the Kardashian-Jenners’ juiciest sex confessions. 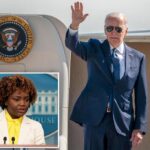 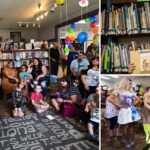