Oops! The Kardashian and Jenner sisters are known for pulling out the stops with their high-fashion ensembles, so of course they are bound to suffer wardrobe malfunctions every so often. From Kim Kardashian’s thigh-baring skirts to Kourtney Kardashian’s teeny-tiny dresses and Kendall Jenner’s see-through tops, we’ve rounded up several instances where the famous siblings were *this* close to showing a little too much skin.

“Thank you to Kim Jones because I just had a little fashion emergency,” The Kardashians star, who wore a dark brown leather dress to the event, admitted in videos from the event circulating on social media, referencing the Fendi designer present in the audience. “Thank God I had SKIMS on or this would have been a very different kind of show tonight.”

Kendall had a near miss herself before accepting the Fashion Icon of the Decade award at The Daily Front Row’s Fashion Media Awards during New York Fashion Week in September 2017.

However, it was handled thankfully prior to her appearing on stage. “My dress broke. The whole zipper came undone, so  [Kendall’s stylist] Marni sewed me in,” Kendall, who wore a tulle Giambattista Valli gown, said in a Keeping Up With the Kardashians episode showcasing the almost malfunction.

Back in November 2015, Kylie Jenner opened up about having a wardrobe malfunction while supporting Caitlyn Jenner at the Glamour Women of The Year Awards.

“Had some major wardrobe malfunctions but that couldn’t stop me from supporting the ones I love,” she wrote on Instagram at the time, sharing a photo of her wearing an oversized jacket.

While whatever went wrong with the outfit she intended to wear occurred away from the cameras, not all of the Kardashian-Jenners have been so lucky in the past with having their wardrobe malfunctions happening without their followers noticing.

Kim risked a major wardrobe malfunction in April 2022 when she modeled her SKIMS’ skin-tight sheer black catsuit on her Instagram Stories. While calling the outfit one of her “favorites,” her bare breasts were briefly exposed.

To see all of the times the Kardashian-Jenners came dangerously close to a wardrobe malfunction, scroll through the gallery of photos below! 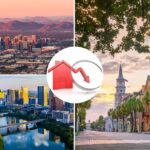 Home prices are falling fastest in these 10 US cities, data shows 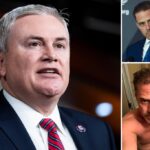