Staying separate. Kanye “Ye” West and ex-wife Kim Kardashian were spotted sitting on opposite ends of the court while attending their daughter North’s basketball game in Thousand Oaks, California, amid his social media tirade.

The Kardashians star, 41, was seen sitting in a front row seat and wearing an all-black outfit, whereas the “Jesus Walks” rapper, 45, sat behind her donning his controversialL “White Lives Matter” shirt and a black baseball cap on Friday, October 7, according to photos obtained by HollywoodLife.

It’s been a hectic week for the exes, as Ye has taken to Instagram to air his grievances against other celebrities who called him out for the shocking shirt design that he placed in his Yeezy Paris Fashion Week show. However, he has also made headlines for speaking about his past marriage and noting that he doesn’t typically “compromise” in an interview with Fox News’ Tucker Carlson.

The other portion of the interview, which premiered on Thursday, October 6, included Ye’s thoughts about Kim’s shapewear company, which has featured her wearing sexy form-fitting outfits and lingerie.

“I had a lot of issues with the imagery of Skims,” he revealed. “I felt like there’s a lot of imagery that was overly sexualized and things I wouldn’t want to see my wife, and definitely not my daughters, doing in the future in order to sell products.”

“Kim is a Christian, but she has people who want her to go to Interview magazine and put her ass out while she’s a 40-something-year-old multi-billionaire with four Black children,” Kanye continued. “And this is how fashion wants to present her.”

Nevertheless, he concluded that he eventually understood that Kim’s modeling campaign was something she was doing “for [their] children.”

Kim has notably remained silent throughout her ex-husband’s recent online tirade. However, her sister Khloé Kardashian put the “Gold Digger” rapper on full blast on Wednesday, October 5, by commenting on one of his since-deleted Instagram posts, in which he claimed the Kardashian-Jenners “kidnapped” Chicago for her 4th birthday.

“Ye, I love you. I don’t want to do this on social media, but YOU keep bringing it here,” the Good American founder, 38, wrote. “You are the father of my nieces and nephews, and I’m trying to be respectful, but please STOP tearing Kimberly down and using our family when you want to deflect. Again with the birthday narrative. Enough already. We all know the truth … You know exactly where your children are at all times, and YOU wanted separate birthdays.”

Ye then shared a screenshot via his Instagram of his former sister-in-law’s comment and called the famous family “liars.” 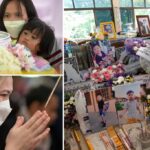 Hundreds mourn in Thailand after 34 killed in day care massacre 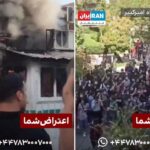