“I had a lot of issues with the imagery of Skims,” Kanye, 45, said while being interviewed by Tucker Carlson on Fox News on Thursday, October 6. “I felt like there’s a lot of imagery that was overly sexualized and things I wouldn’t want to see my wife, and definitely not my daughters, doing in the future in order to sell products.”

He also referenced the Kardashians star’s recent photo shoot for Interview magazine, where her bare butt was on full display on the cover. “Kim is a Christian, but she has people who want her to go to Interview magazine and put her ass out while she’s a 40-something-year-old multi-billionaire with four Black children,” Kanye said. “And this is how fashion wants to present her.”

During his interview with Tucker, 53, Kanye reflected on the backlash he received for buying a house next to Kim’s during her relationship with the comedian, 28.

Kim and Kanye tied the knot in 2014. The reality star filed for divorce in February 2021, while they were both declared legally single in 2022.

The exes have had several ups and downs since their split, though fans watched Kim turn to Kanye for fashion advice during the October 6 episode of her family’s Hulu show.

“No white glasses. Make security wear black gloves. The orange look made me so mad, would have went to jail before I went out in that,” the “Stronger” rapper told Kim via text as she tried on outfits ahead of a fashion show in Milan, Italy. His message concluded, “I’ll be home for North’s game.” 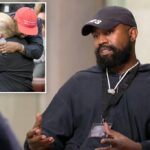 Kanye West says he was ‘threatened’ over support Trump 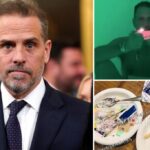 Prosecutors fear Hunter Biden could use past drug addiction as defense