Clean up on aisle three … things are getting messy. Kanye West shared who he’s crushing on and revealed it’s none other than Kylie Jenner’s BFF Stassie Karanikolaou. The rapper confessed his feelings via Instagram on Thursday, October 6.

Kanye, 45, admitted he helped sneak Stassie, 25, and Kylie’s other friends Carter Gregory and Victoria Villarroel into the Balenciaga show at Paris Fashion Week, before making the shocking comment.

“And yes the whole world knows I got a crush on Stas but Victoria is dope too,” the Yeezy founder wrote in the caption alongside a screenshot of Kylie’s Wednesday, October 4, Instagram post. “I just feel dope people should not be held back by fear of losing anything,” he continued, before seemingly referring to the Kardashians as the “Calabasas mafia.”

The “Heartless” artist mentioned Kylie’s former assistant, Victoria, 30, in a now-deleted Instagram post last month. Alongside a photo of Victoria, he issued a warning that contained eyebrow-raising allegations against Kris Jenner.

“Don’t let Kris make you do Playboy like she made Kyle and Kim [Kardashian] do,” the caption read. “Hollywood is a giant brothel,” he continued, before claiming that pornography “destroyed” his family. “I deal with the addiction Instagram promotes it Not gonna let it happen to Northy and Chicago.”

Kanye recently went after Khloé Kardashian after she asked him to keep family matters offline on Wednesday, October 5. “Ye, I love you. I don’t want to do this on social media but YOU keep bringing it here. You are the father of my nieces and nephews and I’m trying to be respectful but please STOP tearing Kimberly down and using our family when you want to deflect,” the Good American founder wrote in a lengthy comment under Kanye’s Instagram post.

“Please leave her and the family out of it so that the kids can be raised peacefully. I come from a place of love and I am happy to continue this conversation privately if you wish.”

“Trav [Scott] gave me the address of my child’s party and that’s how y’all play with black fathers,” he continued. “Y’all also threw a party before for Psalm’s birthday when I was flying back to be there for his birthday and the first I hear about it was seeing pics of the party online.” 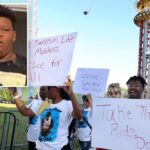 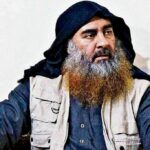