The insults that the 76-year-old Trump allegedly spewed were censored out of the video that describes a meeting where West supposedly asked Trump to run as his vice president in 2024.

Trump, who has already announced his third run for president, apparently scoffed at the idea and brought up Alice Johnson, a woman in her 60s whose sentence he commuted in 2016 after some lobbying from Kardashian.

“He basically gave me this would-be mob-esque kinda story, talking to some kid from the South Side of Chicago trying to sound mobby or whatever,” West said in the video.

“He goes into the story about all that he went through to get Alex Johnson out of jail but he didn’t do it for Kim but he did for me,” West says in the video.

“But then he goes on to say that Kim is a [expletive] and you can tell her I said that. And I was thinking like that’s the mother of my children.”

The actual alleged insult is censored out and West’s mouth is also obscured during that portion of his rant. Both Trump and Kardashian appeared on reality TV shows: Trump on “The Apprentice” prior to his one term as president, while Kardashian spent 20 seasons on “Keeping up with the Kardashians.”

The video, titled “Mar-a-Lago Debrief,” describes a meeting this week between West and Trump at the former president’s Florida resort where he has lived since he left office after his defeat at the hands of Democrat Joe Biden, 80.

The heavily edited video, posted Thursday, claims to be shot in “Yeezy HQ” in Los Angeles and discussed West’s intentions to run for president himself.

The 45-year-old West, who is returning to Twitter after a ban over anti-Semitic posts, previously claimed he showed up to the meeting in jeans and kept Trump waiting.

West has been a long-time backer of Trump, visiting the White House in a red “Make America Great Again” hat in 2018.

West claimed he “walked in with intelligence” and spoke to Trump about listening more to people that have been loyal. The rapper also questioned Trump over people jailed for the Jan. 6 Capitol riots which disrupted Congress’ certification of Biden’s 2020 election victory over Trump.

“My question would be why when you had the chance did you not free the Jan. 6ers?” West claimed he told Trump.

Later in the video, he says,” Since we know, and all the Christians in America that love Trump know, that Trump is a conservative, we’re gonna demand that you hold all policies directly to the Bible.”

Trump was left “basically screaming” at West, telling him he is going to lose, the rapper claimed.

“Trump you’re talking to Ye,” the rapper said in the video. 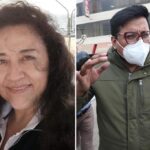 Mexican woman allegedly killed for her organs after online courtship