WASHINGTON – What year is it, again?

Vice President Kamala Harris is requiring senators, their spouses and guests older than the age of 2 to submit a negative COVID-19 test before taking part in the traditional swearing-in photo op when the 118th Congress convenes Tuesday, Capitol Hill sources confirmed to the Post.

The requirements straight out of 2021 were outlined in an email from the veep’s office to the Senate Sergeant-at-Arms — who, in turn, blasted it out to individual Senate offices.

“We look forward to welcoming your Senator on January 3, 2023, to the ceremonial reenactment for incoming and newly re-elected Senators in the Old Senate Chamber,” wrote Grisella Martinez, Harris’ director of legislative affairs. “As you are aware, White House COVID-19 protocols require that anyone over two-years of age who will interact with the Vice President take a medically-administered antigen test within 24 hours prior to interaction, and receive a negative result. This policy applies regardless of vaccination status.”

Martinez went on to say that prospective participants in the ceremony can get tested Tuesday morning in a Senate office building or send results of a “medically administered” test to a White House email address before 9 a.m. The tests must be taken within the 24-hour period from 1 p.m. Tuesday to 1 p.m. Wednesday.

At noon on Tuesday, Harris — who also serves as president of the Senate — will administer the oath of office on the Senate floor to all 35 senators who were returned to Washington in the most recent election cycle.

While the new and returning senators take the actual oath from Harris in small groups, lawmakers then have the opportunity to rerun the ceremony on a one-on-one basis and get a photograph taken with the vice president. The reenactment is often attended by senators’ spouses, children and — if applicable — grandchildren, most of whom end up in the picture with the VP.

Harris’ office reportedly advised lawmakers of the requirement last week, but a Senate Republican source told The Post that their office wasn’t sent the guidance – possibly because they didn’t request a photo with Harris.

It was not immediately clear whether the requirement would cause some lawmakers to opt out of the mock swearing-in. 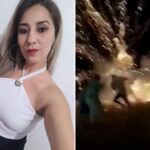 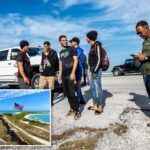