Vice President Kamala Harris made an unforced error of global proportions on Thursday by touting the strong alliance between the United States and “the Republic of North Korea” during a visit to the Korean Demilitarized Zone.

“The United States shares a very important relationship, which is an alliance with the Republic of North Korea,” said the veep, flubbing the official name for longstanding US ally South Korea, the Republican of Korea. “And it is an alliance that is strong and enduring.”

The gaffe was the latest foreign policy-related blunder by Harris, who was mocked earlier this year for a “word salad” discussion of the Russian invasion of Ukraine — in which she made the bizarre claim that the whole of Europe had known peace since the end of World War II.

“Diplomacy is back, baby,” former US diplomat Alberto Miguel Fernandez snarked on Twitter. “Evidently we switched sides in Korea under the Biden Administration and nobody told us. Unlike her boss, she can’t claim advanced old age as a defense.”

“Biden looked around a room for a dead person,” Republican strategist Greg Price tweeted. “Kamala is saying we have an alliance and important relationship with Kim Jong-Un. What an absolute disaster.”

“It is very obvious the VP misspoke here but it leads to a serious question, will the White House admit the mistake or double down like they did yesterday when it was clear Biden messed up big time calling out for a dead member of Congress?” asked longtime GOP communications pro Erin Perrine.

After Harris concluded her visit to South Korea, Seoul’s belligerent northern neighbor fired at least one ballistic missile ​off its east coast. ​

The launch, reported by South Korean military, ​follows the firing of two short-range ballistic rockets on Wednesday ahead of Harris’ stop in Seoul, part of a four-day trip that included a stop in Japan to attend the funeral of former Japanese Prime Minister Shinzo Abe, who was assassinated in July. ​

North Korea also fired off a rocket Sunday before Harris embarked on her tour. ​​

“Over the past seven decades, it has been clear in the south, we see a thriving democracy, innovation, economic prosperity. … In the north, we see a brutal dictatorship, rampant human rights violations and an unlawful weapons program that threatens peace and stability,” Harris said.

“The United States and the world seek a stable and peaceful Korean peninsula where the DPRK is no longer a threat. We will continue to work alongside our partners here and everywhere as is necessary to maintain stability and peace in this region,” Harris continued, referring to the North by the initials of its formal name, the Democratic People’s Republic of Korea.

During her visit to the DMZ, the VP peered through binoculars at military installations in North Korea while US military officials pointed out barbed-wire fences and claymore mines.

“It’s so close,” she remarked.

Earlier, Harris met with South Korean President Yoon Suk Yeol in Seoul where she stressed the alliance between the two nations and expressed concerns over North Korea’s nuclear ambitions. 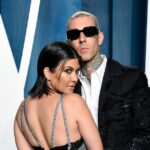 Kourtney Kardashian Did the Dishes ‘Butt Naked’ with Travis Barker 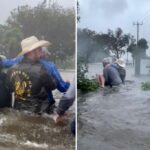