The Justice Department on Friday appealed a Florida judge’s appointment of a special master to review documents seized by FBI agents during a raid on former president Donald Trump’s Mar-a-Lago estate.

The third-party arbiter, Brooklyn federal judge Raymond Dearie, was appointed last month to determine whether the troves of documents seized from Mar-a-Lago on Aug. 8 were covered by Trump’s claims of attorney-client privilege, executive privilege, or other protections.

The DOJ’s appeal is the latest development in the back-and-forth litigation battle regarding the scope of duties of the special master that has caused delays in the federal investigation into whether the 45th president unlawfully kept classified documents at his Florida resort.

Justice Department attorneys on Friday asked that the special master’s entire review be shut down, arguing that US District Judge Aileen Cannon has no basis to make such an appointment.

Trump is not entitled to an independent review of the seized documents or to claim privilege over them, the Justice Department said.

“Accordingly,” they added, ”the special-master review process is unwarranted.”

Last month, the US Court of Appeals for the 11th circuit lifted a hold that halted the Department of Justice’s ability to comb through the documents, allowing them to resume handling the trove of classified records — clearing a major hurdle for investigators.

The Justice Department says it seized about 13,000 records, including 103 with classification markings, during its search.

Trump was issued a subpoena in May demanding any classified documents remaining at Mar-a-Lago be turned over. In June, Trump’s attorney presented investigators with a signed letter claiming that all the classified records the Justice Department had asked for in a subpoena had been handed over.

Investigators, believing additional records remained on the property, obtained a search warrant and returned to the property in August, discovering 33 boxes of documents.

Weeks later, Cannon appointed Dearie to review the document’s after a request from Trump’s legal team.

Dearie was one of two possible third-party legal experts suggested to Cannon by Trump’s team. He was chosen after the Department of Justice agreed he was an acceptable candidate.

The 11th Circuit subsequently lifted Cannon’s prohibition on the department’s use of the classified documents for its investigation pending Dearie’s review, as well as a requirement that the Justice Department provide those specific records to Dearie for his review.

On Thursday, the Supreme Court denied former Trump’s bid to have Dearie vet more than 100 classified documents seized during the FBI’s August raid on his Mar-a-Lago estate.

In a nearly 300-page filing, Trump’s attorneys had argued that it was essential for the special master to have access to the records to “determine whether documents bearing classification markings are in fact classified, and regardless of classification, whether those records are personal records or Presidential records.”

The Justice Department said in its response that Trump’s request lacked merit and that the 45th president would suffer “no meaningful harm” from the federal appeals court’s decision to withhold the classified files from the special master. 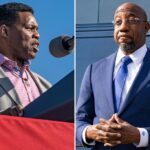 Herschel Walker, Raphael Warnock face off in a debate with Senate control 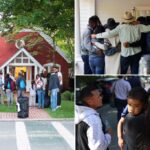