Disgraced reality star Josh Duggar was sentenced to 12.5 years in prison in May 2022 after being found guilty of child pornography charges stemming from his April 2021 arrest.

The eldest son of Jim Bob and Michelle Duggar “allegedly used the internet to download child sexual abuse material,” the U.S. Attorney’s Office in the Western District of Arkansas shared in a press release. “Duggar allegedly possessed this material, some of which depicts the sexual abuse of children under the age of 12, in May 2019.”

After his arrest, Duggar was held at the Washington County jail on April 29, 2021, without bail.

His legal trouble arose days after his wife, Anna Duggar (née Keller), announced they were expecting their seventh child together, a daughter named Madyson, who was born on October 23, 2021. Duggar and his wife are also parents to Mackynzie, Michael, Marcus, Meredith, Mason, and Maryella.

Duggar was then transferred from the Arkansas penitentiary he had been residing at to FCI Seagoville near Dallas, Texas, on June 24, 2022, to begin serving his 151-month sentence. He is in the process of appealing his conviction.

The former Counting On star will not serve the entirety of his sentence, as his release date has already been set for August 12, 2032. He’ll spend a little more than 10 years at the Dallas prison, and although it’s not exactly clear why he will not be serving the full 12.5-year stint, it’s possible he was given credit for the time he previously served in the Washington County, Arkansas, jail. Federal prisoners must serve 85 percent of their sentence, which could be another contributing factor as to why he is getting out earlier than expected.

Duggar is not allowed conjugal visits with his wife, Anna Duggar (née Keller), and the only physical contact they will be allowed to have is “handshakes, hugs and kisses (in good taste)” at the start and end of any visit, according to the Bureau of Federal Prisons website. His visitation time is limited to only four hours’ worth of visits per month, so it will likely be a very lonely 10 years for the convicted felon.

Scroll through the gallery below to learn everything we know about his arrest and upcoming trial. 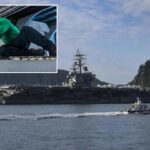