Josh Duggar is about to celebrate his first Christmas behind bars with special meals and activities, In Touch can exclusively confirm.

While they won’t be with their families and loved ones on the holiday, Josh, 34, and the other inmates at FCI Seagoville in Seagoville, Texas, will still get to celebrate. According to the prison’s menu obtained by In Touch, the inmates will enjoy a breakfast that consists of hot oatmeal, breakfast cake, whole wheat bread that comes with assorted jelly and margarine, fresh fruit, skim milk and chocolate milk.

After enjoying a plentiful lunch, inmates will have the option of a chicken sandwich, peanut butter, jelly, potato chips, dessert, whole wheat bread, a beverage and mustard and mayo for dinner.

The prison also has special activities planned for Christmas Eve, which include letting the inmates enjoy a movie and play games such as putt-putt golf, frisbee toss, football toss, cornhole and basketball free throw. The institution’s normal recreational activities will also be available for the inmates to participate in.

Josh “allegedly used the internet to download child sexual abuse material,” the U.S. Attorney’s Office in the Western District of Arkansas previously shared in a press release. “Duggar allegedly possessed this material, some of which depicts the sexual abuse of children under the age of 12, in May 2019.”

The disgraced reality star was sentenced to serve 12.5 years in prison in May 2022. However, In Touch confirmed in July that his release date was later changed to August 12, 2032, which will amount to just more than 10 years behind bars.

As Josh spends Christmas imprisoned, his wife, Anna Duggar, is considering spending the holiday with Jim Bob, 57, and Michelle, 56, despite her strained relationship with her husband’s family.

“There has been a family divide since Josh was convicted, but she may see Jim Bob and Michelle in Arkansas for Christmas,” an insider exclusively revealed to In Touch in November. “She’s not ready to see everyone, but the kids miss their cousins and Anna’s priority is making sure her seven children have a wonderful holiday.”

The 19 Kids and Counting alum – who shares children Mackynzie, Maryella, Marcus, Mason, Michael, Meredith and Madyson with Josh – has been “distancing herself” from her husband’s sisters.

Florida man shoots his way into vape shops before burglarizing them: video 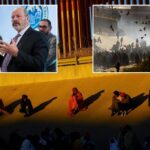