A Colorado man has been arrested on hate crime charges for allegedly unleashing an anti-Asian and homophobic rant at a pair of TikTok food vloggers at an In-N-Out Burger in the San Francisco Bay Area, police said.

On Monday, 40-year-old Jordan Krah of Denver was arrested in San Ramon, California, and booked into the county jail on suspicion of two counts of committing a hate crime, the San Ramon Police Department said.

He posted bail, Lt. Tami Williams said. Detectives will meet with prosecutors this week to request charges be formally filed.

The incident took place on Christmas Eve at the In-N-Out eatery on San Ramon Valley Boulevard, where Arine Kim and her male friend Elliot Ha were recording a food review video.

A fellow diner, who has since been identified as Krah, walked up to the duo, saying: “You’re filming yourself eating? You’re weird homosexuals,” as seen in the victims’ viral video.

Krah continued questioning the two vloggers, both of Asian descent, asking them: “Are you Japanese or Korean? Are you Kim Jong Un’s boyfriend? You have gay sex with him?”

In the video, the harasser threatens to spit in the couple’s faces, calls himself a slave master and hurls an anti-gay slur at Ha.

Kim told KRON4 that the man also harassed other people of color and continued to gesture at the pair as he smoked outside, forcing them to stay in the restaurant until closing time for their own safety.

Kim’s video of the harrowing encounter has drawn close to 4 million views and caught the attention of Police Chief Denton Carlson, who put the word out on social media seeking the identities of the victims and the suspect.

On Sunday, the chief tweeted a photo of the suspect taken on Christmas, when the man exhibited “similar behavior.”

Krah is seen in a silver Mustang with Florida license plates.

After contacting Kim and Ha, Denton launched an investigation that ultimately led to Krah’s arrest.

The station Denver 7 reported that Krah has two open criminal cases in Colorado involving charges of assault and assault with a deadly weapon. 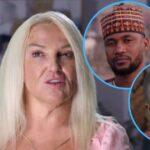 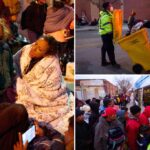