Blazing her own trail. Jinger Vuolo (née Duggar) is set to release a new book, Becoming Free Indeed, in which she “recounts how she began to question the harmful ideology of her youth and learned to embrace true freedom in Christ,” according to the book’s description.

The book will also explore how a yet-to-be-named brother-in-law “who didn’t grow up in the same tight-knit conservative circle as Jinger” played a key role in the how the Counting On alum, 28, examined her beliefs – she and her siblings were raised in the Institute of Basic Life Principles (IBLP) religion – and realized that her “life was built on rules, not God’s Word.”

The book description goes on to state that after her realization about her religious upbringing, “Jinger committed to studying the Bible – truly understanding it – for the first time,” and what “resulted was an earth-shaking realization: much of what she’d always believed about God, obedience to His Word, and personal holiness wasn’t in-line with what the Bible teaches.”

During an appearance on the “Candid: Conversations With Jonathan Youssef” podcast in September, the mom of two opened up about what it was like growing up on reality TV, admitting that it was “so tough” – especially since the religious family didn’t have a television in their home at the time.

“You’re 10 years old and we had camera crews enter. [At] first, it was just a documentary and we had a couple of people, who would come a couple of months in a row, they would come and film our family. And so, it was very odd when that started,” she recalled. “It was a challenge that I would realize the older I got.”

“I mean my parents told us it was a TV show, and we were like, ‘What’s that?’” the Growing Up Duggar author added. “So it didn’t really make sense, or click or register until we got older.”

In December 2015, the show’s spinoff, Counting On, premiered on TLC and was on the air until June 2021. The series was canceled after Josh’s arrest on child pornography charges. He was sentenced to 12.5-years in prison and is currently serving his sentence at the Federal Correctional Institution (FCI) Seagoville in Texas.

“We are grateful for TLC for giving us the opportunity to be on their network over the years and their kindness to the Vuolo family,” Jinger and her husband, Jeremy Vuolo, with whom she shares daughters Evangeline and Felicity, wrote in a statement posted to Instagram that month. “It is a remarkable journey that has opened doors to traveling and experiencing the world in a way that we would have never imagined possible.”

“We wholeheartedly agree with TLC’s decision not to renew Counting On and are excited for the next chapter of our lives,” the message continued. “We look forward to continuing our creative journey in Los Angeles and seeing what the future holds.” 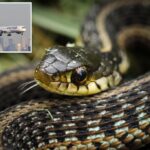 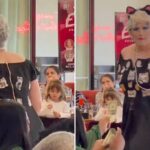 Video of drag queen gyrating next to child sparks backlash