Jeremy Renner was only out driving the snowplow that left him critically injured because his handyman was blocked by cops from coming up the street, a neighbor told The Post Wednesday.

“It’s a private road where he lives. I’ve never plowed that road but his maintenance guy — the (California Highway Patrol) wouldn’t allow him up the hill to plow the road, so Jeremy decided to do it himself,” the 58-year-old man explained.

“When I saw Care Flight here, I thought it was some yahoo who got stuck skiing. They are always doing a circle around here.”

But it was the 51-year-old Marvel actor who suffered “blunt chest trauma and orthopedic injuries,” on New Year’s Day, his rep said, after the two-time Oscar nominee was trampled by his own snowplow.

The neighbor, who did not want to give his name, said Wednesday he thinks Renner only began plowing so his family could leave their home. The neighbor cleared the area around Sunridge Court shortly before Renner’s freak accident, which he believes helped the medical transport land and rush Renner to the hospital.

“I plowed Sunridge right before he hurt himself. I guess I plowed just enough so they could get Care Flight into the Tannenbaum,” the neighbor said in reference to the venue Tannenbaum Event Center that is less than a mile from Renner’s home.

“I just finished that or it would have been total snow. I think Jeremy was trying to plow his family out because they had to leave.”

“If I had woken an hour later, no one would have gotten to that road or any road,” the neighbor additionally said.

The man’s wife told The Post her husband only plowed Sunday morning to get a car out that was stranded in the parking lot at the Tannenbaum.

“The only reason he plowed the Tannenbaum that day where Care Flight landed was because an idiot left his car in the middle of the parking lot,” said the woman, who did not give her name or age.

“He was going to wait until the next day but he decided to be a nice guy and plow it out. At the same time when he was coming back here, that’s when Care Flight left.”

The male neighbor said he plowed the area with a Bobcat while Renner used a snowplow that can’t handle heavy snow.

“Snowcats are used for grooming,” he said of the snowplow, which is also called a PistenBully. “It’s not supposed to be used for heavy snows.”

Lars Mintz, who is a lift operator and maintenance worker at Sky Tavern ski resort, told The Post the PistenBully used by Renner might have had a problem with the brakes.

“If it didn’t stop, it was probably a brake malfunction,” the 23-year-old explained. “You put it in park and you lock the e-brake. It’s not like a transmission — it’s a hydraulic pump, which turns off the power to move the tracks forward.”

“Maybe he forgot to set his brake,” Mintz said of Renner.

Mintz said he prefers to use a Bobcat for snow removal, though he noted the Pistenbully at the ski resort is used for both snow moving and grooming.

“These things are very dangerous,” he said of the PistenBully. “This is the first time I’ve heard of Jeremy Renner as a person.”

The “Avengers” and “Bourne Legacy” star is in critical, but stable condition. More details from a 911 call log revealed the right side of Renner’s chest collapsed and his upper torso was crushed under the nearly 14,500-pound plow, according to TMZ.

He shared a photo from his hospital bed of a badly bruised face Tuesday evening.

“Thank you all for your kind words,” Renner wrote in the caption. “I’m too messed up now to type. But I send love to you all.”

Renner is known in the area for being neighborly and regularly snowplowing over many years.

Washoe County Sheriff Darin Balaam said during a Tuesday press conference Renner’s PistenBully got “stuck” when Renner tried to “retrieve” the vehicle and “get [it] moving.”

While he was successful, he was off the machinery and chatting with a family member when the snowplow started to move, the sheriff said.

“In an effort to stop the rolling PistenBully, Mr. Renner attempt[ed] to get back into the driver’s seat of the PistenBully,” Balaam said. “Based on our investigation, it’s at this point that Mr. Renner [was] run over.” 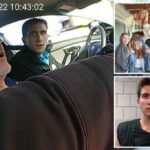 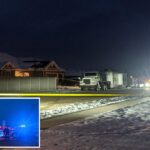