Roller-coaster relationship. Jennifer Garner and John Miller have had a whirlwind romance, which has included a breakup and reconciliation.

The pair started out hot and heavy, though their spark fizzled as the COVID pandemic kept them apart after less than two years of dating. “They split up before L.A. went into lockdown,” a source exclusively told In Touch in August 2020. “Jen and John remain on friendly terms so there’s a possibility that they could rekindle their relationship in the future, but right now, it’s over.”

Prior to being separated by quarantine, Jen and John were “doing great,” another source exclusively told In Touch in March of that year. “He’s got a separate life from Jen’s Hollywood world, so it works for them.”

A little bit of distance appeared to work in their favor. “[John]’s very independent and likes to take things slow,” the source shared. “He has a young daughter that he’s also coparenting, so he’s not trying to insert himself in Jen’s public life.”

The CEO was previously in a 13-year relationship with Caroline Campbell, with whom he shares two children  before they split in 2018. As for Jen, she and Ben Affleck finalized their divorce that same year.

“He’s fine being in the background,” the insider continued. “He loves Jen, and she loves him, they’re still going strong, but the coronavirus has forced them to see a little less of each other than usual right now.”

However, the split did last long, and the pair reconciled in spring 2021. A source exclusively told In Touch that Jennifer “considers herself blessed” to have reconnected with the businessman. “Jen and John are together and they’re happy,” the insider said. “Jen absolutely loves John, he’s super normal, a great dad, successful and handsome.”

Scroll below for a closer look at Jen and John’s romance. 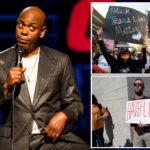 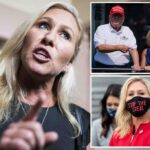