Teen Mom 2 alum Jenelle Evans is doing everything she can to help former best friend Taylor Lewis’ family in the wake of her tragic death, she exclusively tells In Touch.

“This news about Taylor shocks me and makes me very sad. I have not been OK the past few days,” Jenelle, 31, explains to In Touch. “This is affecting the entire community where I live. I am in contact with the family and trying to help out in any way I can,” she continues.

In Touch exclusively confirmed on Thursday, January 5, that 29-year-old Taylor had died at a hotel in Eden, North Carolina. Her sister, Haylee Lewis, told In Touch at the time that her cause of death was unknown, but police were investigating a possible homicide.

“I’ve been speaking with detectives too, and they are saying they saw footage of two men with Taylor in the hotel room,” Haylee told In Touch, adding that Taylor was discovered by a housekeeper “hours later.”

In the wake of the news, Jenelle took to social media to pay tribute to her childhood friend, writing on Facebook, “Taylor what happened?”

“We formed a close bond after I broke up with my ex, Courtland,” Jenelle recalls to In Touch five days after Taylor’s passing. The MTV alum married Courtland Rogers in December 2012 after she became pregnant, but the pair split one month later, and Jenelle went on to have an abortion. Taylor was Courtland’s first wife, and the pair shared a daughter, Jordan.

Jenelle and Taylor memorably appeared together during the Teen Mom 2 season 5 premiere in January 2014. “I did relapse [on heroin] one time and that was when I met Courtland,” Jenelle shared with her friend at the time. “Me and him, we got married only after three months of dating. I’m so mad at myself for marrying someone that I didn’t think through.”

The Read Between the Lines author went on to fall in love with Nathan Griffith, and the pair welcomed a son, Kaiser, in June 2014. The couple got engaged in January 2015, but split in August of that year.

“Taylor was with me when I first met Nathan because she wanted to make sure I was safe. We became best friends very quick,” Jenelle explains about how her pal was there for her. “Taylor was also close to my other best friend, Tori, who appeared on the show with me over the years,” the former reality star continues. “We want to know what happened to Taylor.” 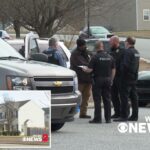 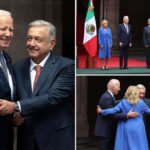 Biden says US, Mexico ‘well on our way’ to ending border crisis — despite record surge