Her second husband wasn’t the full package, either.

MacKenzie Scott, the ex-wife of billionaire Amazon founder Jeff Bezos, has reportedly finalized her second divorce after a year of marriage — following a 2019 scandal that exposed how the tech tycoon had cheated on her.

The 52-year-old philanthropist officially split with Dan Jewett —  a chemistry teacher at her kids’ upscale private school — in court papers signed by a Washington state judge, according to TMZ.

The former lovebirds got quietly hitched in March 2021, a couple of years after Bezos was busted sending sleazy selfies to then his then-mistress Lauren Sanchez, leading Scott to divorce him in September 2019.

In September, Scott filed for divorce from Jewett and a property settlement will be hashed out in yet-to-be-filed documents, according to TMZ. They have no kids together.

The celebrity news outlet didn’t report the date or specific location of the marriage dissolution, though they both live in King County, which includes Seattle.

Jewett didn’t contest the divorce, and they had both signed a prenuptial agreement.

Scott, who is also a novelist, was married to Bezos for nearly 25 years and has four children with him. She reportedly parted ways with the Amazon honcho with a jaw-dropping $38 billion dollars.

Bezos and TV anchor Sanchez, are reportedly living together but haven’t tied the knot. 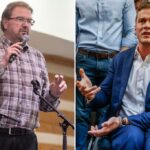 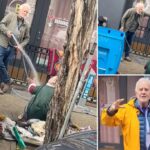