It was like something out of a disaster movie.

Dramatic footage captured the moment Italy’s Stromboli volcano erupted earlier this week, shooting ash plumes into the sky and sparking a “mini tsunami.” The explosive video is currently blowing up online as authorities issue warnings to the surrounding population.

The volcano — which is one of the few in the world with continuous activity — blew its top at 4 a.m. Monday morning, sending columns of ash into the air over Stromboli island, which is part of the Aeolian archipelago off northern Sicily, the Local reported. It also sent lava cascading into the sea, creating seismic waves that were registered by the tsunami warning system.

The volcanic event was nearly identical to an eruption Sunday, in which Stromboli’s crater rim partially collapsed and caused these so-called “mini-tsunamis.

A Twitter video shared by Marco Pistolesi, professor of Volcanology at the University of Pisa, depicts the moment the lava flow cascaded into the sea at terrifying speeds with a Mordor-esque spout of ash in tow like a pyroclastic drag racer.

“After days/weeks of increased activity (which included a major explosion and 2 effusive events) at #stromboli, this morning a partial collapse of the crater rim generated a flow and initiated a lava effusion,” Pistolesi wrote in the tweet for the video, which was viewed nearly 11,000 times.

Thankfully, no one was killed in the eruption. However, Italian civil protection authorities issued an orange level warning — the second highest on the color-coded volcano warning scale — for Stromboli.

Meanwhile, the island’s 600 residents were urged to stay indoors and stay away from windows and glass doors while boats were warned to maintain distance from the coast.

“We will evaluate if it is necessary to move some ships to ensure a possible evacuation of the island but I repeat: we are prepared,” said Riccardo Gullo, mayor of the nearby island of Lipari.

One of the most active volcanos, Stromboli has been erupting continuously for the last 90 years. In 2019, a tourist perished after an eruption covered the island in ash. 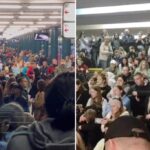 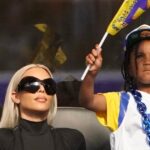