Iran’s notorious Evin Prison — home to political prisoners and other anti-government activists — was engulfed in flames Saturday as gunshots and explosions rang out amid nationwide protests.

A senior security official told Iranian state-run media that the “situation is completely under control” following clashes between prisoners and prison staff at the Tehran facility.

Prisoners set fire to a warehouse stocked with uniforms, which sparked the inferno, the official said.

Tehran prosecutor Ali Salhi later said that “peace” had returned to the prison, claiming the situation was not related to the larger anti-government protests that have swept the country for four weeks.

In videos circulating online, multiple gunshots can be heard as the fire rips through the prison, sending plumes of black smoke into the sky.

It’s not clear if anyone has been injured.

At least 233 protesters have been killed across Iran since Sept. 17, according to U.S.-based rights monitor HRANA. The group said 32 of the dead were under 18-years-old. Earlier, Oslo-based Iran Human Rights estimated 201 people had been killed. 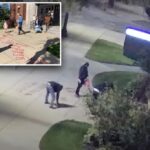 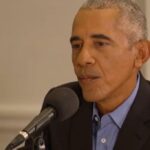