Hard-line Iranian President Ebrahim Raisi boasted about his regime’s international arms sales Saturday — even as his foreign ministry condemned calls to investigate the Iranian “kamikaze drones” that have been wreaking havoc in Ukraine.

Raisi said that multiple countries had clamored for Iranian-made weaponry when he attended the United Nations General Assembly in New York last month.

“People came up to me asking us to sell them military products,” he said in a speech Saturday.

“‘Why us?’ I asked them, ‘there are so many other countries’ … They said ‘because yours are better’.”

Meanwhile, Iran’s foreign ministry called “false and baseless” the multiple reports that Iran has sold 1,000 self-detonating drones to Russia for use in its devastating attacks on Ukrainian civilians and infrastructure.

“The government of the Islamic Republic of Iran, in its pursuit to protect its national interest and to secure the rights of the noble Iranian people, reserves the right to respond to any irresponsible action,” Kanaani said.

The terrifying Shahed-136 attack drones — explosives-equipped “loitering munitions” that can hover quietly above a target before destroying it, and itself, with a self-immolating explosion — have been seen with increasing frequency in Ukraine’s bombarded cities, including Zaporizhzhia, Kyiv, and Odessa.

Iranian troops on the ground in Crimea are maintaining the drones and training their Russian counterparts in their use, the White House said Thursday.

The Iran-Russia drone arrangement could be a breach of the UN Security Council resolution that approved the 2015 Iran nuclear deal, envoys from the three European nations said.

But Raisi said they’re just jealous — complaining that Iran’s foes “do not want us to grow … to conquer markets.”

“Let the enemy get angry and die of anger,” he said. 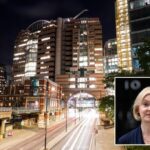 Britain’s economic down to ‘negative’ amid political turmoil: Moody’s 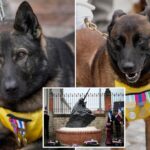