The Mexican immigrant shot and killed by Border Patrol agents in Texas on Tuesday reacted to agents learning about his criminal record by grabbing for an agent’s gun, a source with knowledge of the investigation told The Post.

The unidentified Mexican national reached for the weapon after agents ran a background check and discovered he had criminal charges, the city’s Mexican consulate confirmed to The Post.

He was then shot by officers and transported to a local hospital but died from his injuries.

The FBI has stepped in as the lead investigative agency into the deadly shooting, due to the nature and location of the incident.

Sources also said they believe there was an assault on a Border Patrol agent during the incident.

Neither the Ysleta Border Patrol Station in El Paso or the Mexican Consulate would comment on what criminal charges the man who was shot had been initially charged with or confirm his identity.

“I know a lot of people see the [immigrants] that are coming over and immediately giving themselves up.

“There’s a lot of that, but there’s also a lot of people that are trying to get away [from Customs and Border Protection].”

Assaults on agents are up this year, compared to the two previous years, according to Border Patrol statistics.

Since the surge started in August, the city has bussed thousands of immigrants to New York City. 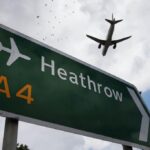 Woman dies on United Airlines flight from Houston to London 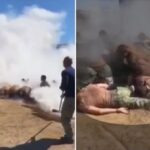 Navy SEAL recruits forced to sing while being tear-gassed