University of Idaho murder suspect Bryan Kohberger may have been driven to kill by his history of social issues and a possible “incel complex,” a former FBI investigator told The Post.

“The murders may have been… an effort to assert some type of dominance,” former FBI agent and security expert Pete Yachmetz explained to The Post this week.

Kohberger, 28, was arrested late last month for the Nov. 13 stabbing deaths of Kaylee Goncalves, 21, Madison Mogen, 21, Xana Kernodle, 20, and Ethan Chapin, 20, at an off-campus residence in Moscow, Idaho. Yachmetz believes the brutality of the crime and Kohberger’s history of social challenges may offer some hints to his possible motive.

“I believe a continued stabbing of a victim indicates…an uncontrollable rage and extreme anger,” Yachmetz said, noting that Kohberger has been described as “socially awkward with a long history of interpersonal problems.”

“I think he may have developed a sort of incel complex,” he surmised.

The term incel – an abbreviation for “involuntarily celibate”– is generally used to refer to men who struggle to establish romantic or sexual relationships. The identity is occassionally linked to misogynistic online forums and, in extreme cases, crime: In 2021, self-professed incel Tres Genco was busted for planning a mass shooting of 3,000 sorority sisters at an unnamed Ohio university. Genco, 22, plead guilty to the sick plot and is facing life in prison.

Though it is not a proper psychological definition, Psychology Today noted last year that men who identify as incels often have poor mental health, and experience feelings of victimhood, inferiority, and loneliness.

Yachmetz’s personal analysis of Kohberger echoed that of Dr. Carole Lieberman, a forensic psychiatrist who told CourtTV last week that she believed the suspect fit the incel profile.

“I’ve been saying from the beginning that he’s an incel,” Lieberman said, explaining that she was largely convinced due to Kohberger’s alleged “choice of victims,” or decision to target mostly female college students.

Lieberman was also intrigued by evidence which suggested Kohberger returned to the crime scene in the hours after the murders.

“Incels like to be known for when they kill people, or when they have a conquest like this,” she said.

“On the one hand, he wanted to commit the perfect crime and not be caught, but on the other hand, he did want to be caught, and be proud, in a sense, of what he did.”

At the time of the murders, Kohberger was a doctoral student in criminology at Washington State University, just 15 minutes from Moscow. While WSU classmates described him as “gregarious,” peers from his Pennsylvania hometown remembered him as a loner who was bullied for his weight before spiraling into drug addiction.

One alleged middle school crush of Kohberger’s, Kim Kenley, reportedly even contacted the FBI about her experience with him.

Another middle school classmate, who asked to remain anonymous, told the outlet that the popular cheerleaders “tortured” Kohberger.

“The whole clique of popular girls made fun of him in school. They were the cheerleaders and the ones that every kid had crushes on,” they said.

Kohberger’s adolescent social isolation was also reflected in posts he reportedly made to online forums, writing in one 2011 entry that he felt “like an organic sack of meat with no self-worth.”

Hypotheses about the possible motive for Kohberger’s alleged crime come as investigators scramble to establish a link between him and the four victims. After a brief hearing on Thursday, the suspect remains in custody in Latah County, where he is being held without bail.

Kohberger, who has not entered a plea despite facing four counts of murder and one of felony burglary, is expected back in court on June 26. 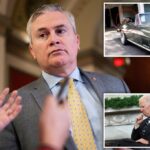 Rep. Comer says his panel will examine ties between Biden and China 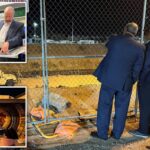