The four University of Idaho students found murdered in their off-campus home reportedly had their hands bagged at the scene to preserve any possible DNA evidence that could lead cops to their killer.

Investigators secured each of the victims’ hands in the forensic bags before their bodies were removed from the grim crime scene in Moscow, Idaho last month, coroner Cathy Mabbutt told Fox News on Monday.

Forensic experts say it is possible the slain students — Kaylee Goncalves, 21, Madison Mogen, 21, Xana Kernodle, 20, and Ethan Chapin, 20 — could have the suspect’s DNA under their nails or on their hands.

“When you have an up-close attack like this, the chances are good that the victim scraped at the face or the arms [of the assailant] as they try to defend themselves,” said Joseph Giacalone, a retired NYPD sergeant and professor at John Jay College of Criminal Justice.

He said that if any DNA was obtained from the scene or the victims, investigators would run it through various databases to “try and identify a potential perpetrator.”

Local police still haven’t named a suspect or released a profile of the killer.

Cops have said the Nov. 13 attack was “targeted” but haven’t elaborated any further.

Autopsies determined all four students were stabbed to death and that the attack likely started while they were sleeping.

It came as Steven Goncalves, the father of one of the victims, blasted tight-lipped cops as “cowards” over the weekend, insisting they needed to release information to the public to help track down the killer.

“I got outraged by them not just coming out and saying this was a woman or a man because they should know by the amount of strength it took to deliver the injuries,” Goncalves said.

“They’re just being cowards. There are girls walking around the street right now that deserve to know. They should be looking out for a sadistic male.” 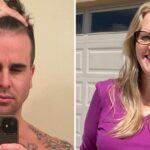