The Idaho house where four college students were murdered will remain a crime scene until Feb. 1 under a judge’s order.

The house “will be locked, crime tape will remain, on-site police presence is not required,” Magistrate Court Judge Megan Marshall wrote in the Dec. 30 order, which came the same day Bryan Kohberger was arrested for the killings.

She set the date for Feb. 1 “or until further order of the court.”

Marshall wrote that all evidence collected “including but not limited to bodily fluids, blood, tissues, notes, slides, photographs or other relevant information” be held and preserved for Kohberger’s defense.

On Friday, officers were seen removing two mattresses from the home that looked like they were stained with blood.

A cleaning crew had been set to sanitize the home where the four University of Idaho students were slaughtered in November, but was turned away after Kohberger’s arrest.

What happened between Matt Gaetz and Mike Rogers in the House 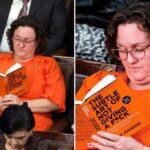