Michelle Saum Schofield had just finished her shift at a burger drive-in, wrapping up an uneventful rainy night in Lakeland, Florida. The outgoing 18-year-old hopped in her Mazda to pick up her husband Leo as planned, but when she never arrived, he started to worry.

Three days later, on Feb. 27, 1987, Michelle’s body was discovered in a nearby drainage canal. She had been stabbed 26 times.

Despite unwavering denials and no physical evidence linking him to the scene, Leo Schofield, 21, was later arrested, convicted of first-degree murder and sentenced to life in prison in 1989. Prosecutors relied on witnesses who portrayed the young guitarist as an abusive spouse who regularly argued with his wife.

Leo maintained his innocence while his attorneys pointed to unidentified fingerprints found in Michelle’s car — as well as a purported confession from another man, Jeremy Lynn Scott. But appellate courts denied Leo a new trial year after year.

Flash-forward to 2018. Pulitzer Prize-winning author Gilbert King learned about Leo’s case that summer from a Florida judge and started probing the “clear miscarriage” of justice.

“The more I looked into the case, the more I came to realize that Leo was wrongfully convicted, and I became more and more convinced that Jeremy was never properly investigated by the State of Florida,” King, 60, of Brooklyn, told The Post.

“So, I set out to answer this one question: Why is Leo Schofield still in prison, when the man who is forensically linked to the crime scene has confessed to the murder?”

In 2004, the Florida Department of Law Enforcement revealed that the fingerprints in Michelle’s red Mazda belonged to Scott. Scott, also known as “Bam Bam” on the streets, is currently serving life for robbing and strangling Donald Moorehead, 37, with a phone cord in a Lakeland trailer in 1988.

King tracked down both Leo Schofield and Jeremy Scott, and turned his quest for the truth into a true-crime podcast, “Bone Valley.” Scott, now 53, gives a detailed confession about Michelle’s slaying in the ninth and final episode, which airs Wednesday,

In the episode, Scott reveals it was dark and raining when he spotted the teen at a gas station.

“I was sitting there while she was on the phone talking to somebody,” Scott told King from Martin Correctional Institution in Indiantown, Fla. “And when she got off, she asked [if] I needed the phone, I said no. She said, ‘Why you all wet,’ you know, cause it’s raining, you know? And I said, I got no ride. You know? So she gave me a ride. And that’s when I guess I lost it then.”

Michelle gave Scott a quick lift to an isolated lake, where he planned to steal her car, but “panicked” when she started screaming after his hunting knife fell out his pocket.

Scott said he then repeatedly plunged the knife into Michelle’s body.

Then, Scott said, he found some plastic nearby and wrapped her body in it to “protect her from being eaten by the gators, snakes or whatever” and “slid her down into the water.”

Scott said he regretted killing a woman who had shown him kindness.

“She gave me a ride and all that,” Scott told King. “That’s why it hurts me more. Girls like that, they don’t pick up people.”

Nearly 36 years later, Scott said he still relives the day of her murder.

“I dream, I wake up, I turn over, I see a dead body sleeping next to me,” Scott said. “I sleep with dead bodies every night when I go to bed. That’s my punishment.”

In the same episode, Scott also admits to gunning down a cab driver in Intercession City, Florida, on April 10, 1987, about six weeks after killing Michelle. That homicide had stymied investigators and went cold for decades after an initial suspect went free on a mistrial.

“That happened right after Schofield,” Scott told King. “I broke into a house and stole the gun.”

Scott insisted that Leo Schofield had nothing to do with his wife Michelle’s barbaric death — a claim backed by Leo’s attorneys who are still fighting to get him out of prison.

“The man has been in prison 33 years, he needs to be out,” Scott said. “That man ain’t do nothing. He’s innocent.”

Scott even penned a letter admitting to his guilt, writing, “Leo didn’t kill his wife. I did.”

King sent that letter to Leo Schofield, now 56, at Hardee Correctional Institution in Bowling Green, Florida, roughly 100 miles away from Scott’s prison. Without his cherished guitar to play, Leo finds solace in the letter, which he carries with him every day.

“He gets chills every time he reads Jeremy’s words,” King told The Post. “Leo gets very emotional hearing those words and hearing Jeremy’s confession to me. He told me, ‘It’s like, how many times does he have to say it?’”

Scott initially claimed to have stolen the stereo from Michelle’s Mazda when his fingerprints were identified, but later confessed to stabbing Michelle in 2016, court records show. He then contradicted himself a year later — testifying at an October 2017 hearing that he killed Michelle before saying “I didn’t do that” upon seeing crime-scene photos.

Court records reviewed by The Post indicate Scott did maintain his confession when questioned again, flatly saying, “I killed her.” But a judge denied Leo Schofield’s motion for a new trial, a ruling that was upheld by an appellate court in May 2020, records show.

Leo, meanwhile, said his wife’s confessed killer isn’t the villain he always imagined — but rather a “pathetic human being” who made poor choices amid a rough upbringing.

“He’s nothing like I was expecting,” Schofield said on the podcast. “He’s had a really rough go as I’m sure you’re aware of — even in the prison. And I do believe he’s sorry. But it just shows you that he has a heart, he does have a heart, you know, that he’s not a monster … I thank him for the truth.”

Scott also sheds light on the still-unsolved 1987 homicide of Joseph Broward Lavair, 25, confessing to killing the cab driver with a .357 Magnum revolver he stole from a cop’s house in Winter Haven.

Scott said he called the Yellow Cab Company, which dispatched Lavair to a shopping center in Kissimmee. He said he intended to rob the cabbie for “extra money,” but instead shot him three times and dumped him on the side of a road in Intercession City.

Scott got behind the wheel and sped off, but crashed a few miles later. He then ran away while warning those nearby that the taxi was “gonna blow” as he ducked into a dilapidated home and made off undetected, he said.

Daniel Otte, then 19, was charged in Lavair’s slaying, but was ultimately acquitted by a jury in October 1987 following a mistrial. Witnesses identified the landscaper as the man running from the totaled taxi, but Otte maintained he had been with friends all night.

“I got lucky because they accused somebody else of it,” Scott said. “But nobody else been charged with it.”

Once behind bars for strangling Moorehead in 1989, Scott told his cellmate he also killed Jewel Johnson, 75, in 1985 when he was 15, said King. The young Scott pled not guilty at the time, and was acquitted for the crime. In total, Scott has confessed to killing four people, King said.

But prosecutors have shot down Scott’s claims regarding Michelle Schofield, saying he’s “waffled between denials and confessions” in that case since 2016.

“Jeremy Scott cannot and should not be believed,” Chief Assistant State Attorney Jacob Orr said in a statement. “He is simply not credible.”

Orr also noted Leo Schofield failed a polygraph when asked if he stabbed Michelle as part of the initial probe, as well as a judge ruling that Scott “could not recount facts accurately” during a 2018 hearing.

“This issue has been litigated extensively,” Orr continued. “It has been ruled by multiple judges. It seems this is an attempt to promote a podcast.”

King remains undeterred though, promising to keep fighting for Leo’s exoneration. The author believes Scott provided him details only Michelle’s true killer would know, including a pack of Marlboros found near bloodstains just feet away from the canal where her body was recovered.

Scott, who smoked Marlboros at the time, said he also stole $10 from Michelle after stabbing her — or the same amount she made during her shift minus $3 she spent on gas, King said.

“I am confident that Bone Valley corrects the State of Florida’s false narrative that Leo Schofield is guilty of killing his wife, Michelle,” King told The Post. “I do believe that if the Schofield case is turned over to any Conviction Integrity Unit in the state, they will reach the same conclusions that I’ve reached: Jeremy Scott killed Michelle Schofield, and Leo Schofield is an innocent man.”

Leo could be paroled as soon as May, officials for Florida Commission on Offender Review confirmed. But he’s unlikely to be freed since he’ll “refuse to apologize for a crime he did not commit,” King said.

Still, Leo’s legal team, led by attorney J. Andrew Crawford and the Innocence Project of Florida, remain undaunted in their crusade for vindication.

“Forensic and testimonial evidence ties Jeremy Scott to the crime, yet Leo Schofield remains locked up,” Innocence Project of Florida Executive Director Seth Miller told The Post. “That’s the kind of tunnel vision that leads to wrongful convictions. We’re reviewing the revelations in the podcast to determine the best way forward.”

Law enforcement sources, meanwhile, said they will not be pursuing King for the murder of cab driver Lavair either.

“We recognize Mr. Otte was acquitted of the crime in a second trial based on a technicality,” Osceola County Sheriff’s Office told The Post in a statement. “However, his acquittal in court does not prove actual innocence. At this time, there is no credible evidence linking Mr. Scott to this crime.” 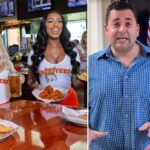