The husband of a Tennessee cop who was fired for having sex with six other officers is a wholesome state park ranger, The Post has learned.

Ex-cop Maegan Hall said that she and her husband, Jedidiah Hall, were in an open marriage — although he did not seem to be on board, according to an internal investigation at the La Vergne Police Department.

According to Hall’s Facebook page, she and Jedediah were married on May 23, 2018.

Born in Chapel Hill, Tennessee, Jedidiah said the time he spent in Henry Horton State Park as a child inspired him to work with Tennessee State Parks.

“Without much money to travel, Henry Horton became my family’s go-to summer destination. Growing up on the trails and swimming in the river made me fall in love with our state parks and being in the outdoors,” he wrote in a blog for the parks department.

Jedidiah Hall had initially planned to become a teacher, he said. However, while working towards his master’s degree at Middle Tennessee State University he was hired by Henry Horton State Park as a Seasonal Interpretive Recreator over the summer.

“That summer changed my life, and I decided to teach park visitors about Tennessee’s history and natural resources,” he wrote.

He said that his favorite part about working for the state parks department “is witnessing the look in our visitor’s eyes when they connect with our state’s natural or cultural resources.

That “wow” moment makes all of the hard work worth it, and it makes me fall in love with our park system all over again.”

He also encouraged anyone interested in joining the state parks department to start by volunteering at their local parks picking up garbage and helping with waterway clean-ups.

Hall did not immediately respond to a voicemail left by The Post.

Maegan Hall, who joined the force in 2021, and her fellow law officers allegedly engaged in wild affairs that included exchanging nude pictures, taking her top off at a hot tub party, and even having oral sex with two officers.

Two other officers who allegedly had romps with Hall — Patrick Magliocco and Larry Holladay — kept their jobs but were suspended, according to reports.

In the Dec. 28 report, Magliocco said he had seen Hall and Holladay kiss while watching football at a party, and said Hall had kissed his own wife, Amy, after learning they had an “open marriage,” according to the document.

Magliocco also noted he had become concerned about Hall’s mental health and heavy drinking. He said Hall had once pulled the trigger on an empty gun pointed at her temple “so she could hear what it sounded like” and said she was suffering from mental illness.

Powell initially denied that he had a sexual encounter with Hall, but said “everybody knows she has multiple partners,” as he named Holladay and McGowan to investigators

Holladay admitted under questioning to having sex with Hall “multiple” times, and McGowan revealed that he once went to Hall’s house with another female and exposed his genitals, according to the report.

After initially denying having sexual relationships with Powell and Magliocco, Hall later fessed up to the affairs and also admitted having sex with Lugo at a motel after they met at a Go Cart center — a charge that Lugo initially denied before caving under a second interrogation.

Under questioning, Shields said, “I have never had sex with Maegan Hall,” until admitting she had performed oral sex on him while on duty when pressed.

An repeatedly-mentioned event in the report was a Memorial Day party in a boathouse owned by another member of the department, to which several officers had brought their children.

At one point during the party, an “intoxicated” Hall was reportedly being force-fed vodka by Magliocco in the hot tub, at which time her top came off, and other cops stopped the former officer from drinking and helped her cover up “to protect her,” according to the report.

HR Director Andrew Patton, who authored the report and conducted the investigation, sanctioned the eight officers with various penalties for “sexual activity while on duty, sexual harassment, conduct unbecoming of an officer, and lying during the course of the investigation.” 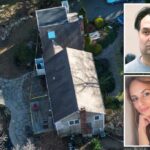 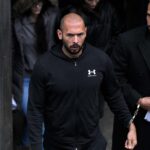 Andrew Tate to remain in Romanian custody after appeal loss