Sam Bankman-Fried was the golden child of cryptocurrency.

The buzzy company called FTX, which he co-founded, made him worth $15.6 billion — and celebrities wanted in on the profits.

During the 2022 Super Bowl, comedian Larry David starred in a commercial for FTX.

In the ad, which cost a reported $30 million, David listens as an actor playing an FTX executive implores him to invest via the company’s “safe and easy way to get into crypto.” Ever the skeptic, a smirking David replies: “Ehhhh, I don’t think so. And I’m never wrong about this stuff — never.”

Bankman-Fried — and his celebrity pals — should have heeded that advice.

Now, FTX is at risk of bankruptcy and a total collapse, scrambling to shore up an $8 billion liquidity crisis that has left investors unable to claim their funds. The equity stakes granted to celebrities are pretty much worthless. And Bankman-Fried’s empire faces a federal probe over whether it mishandled clients’ money.

It’s a massive fall for Bankman-Fried, who, at just 30 years old, was once tipped to be one of the biggest donors to the Democratic Party in the 2024 presidential election.

“I f—ed up, and should have done better,” Bankman-Fried, who has personally lost at least $13 billion in the debacle, tweeted on Thursday. “The full story here is one I’m still fleshing out every detail of, but as a very high level, I f—ed up twice.’

Bankman-Fried was raised near Palo Alto, Calif., by two Stanford Law professors, Joseph Bankman and Barbara Fried. After flipping a coin to choose between MIT and CalTech, he went to Cambridge, Mass., where studied physics and mathematics.

“Nothing I learned in college ended up being useful … other than, like, social development,” Bankman-Fried told Yahoo Finance. “On the academic side, though, it’s all f–king useless … School is just not helpful for most jobs.”

So he ended up fashioning his own kind of career, via a shrewd hack in 2017: taking advantage of a price discrepancy that allowed him to buy Bitcoin on the cheap in Japan and sell it high in other countries. Within 18 months, he had turned $10,000 into $1 billion.

In 2019, with one partner, he launched FTX crypto exchange, which promised a better, safer way for customers to purchase the emerging currency. Customers who bought a “token” from FTX (referred to as an FTT) were allowed to sell crypto at a discount on the FTX.

Over the next few years, the boom of the FTX crypto exchange made Bankman-Fried even wealthier.

And A-list celebrities loved the smell of the profits. Sources told The Post that at least one major Hollywood power player steered celebrities toward FTX, believing that the crypto exchange was “printing money.”

Even the Miami Heat got involved. The NBA team signed a $135 million deal last year to rename its stadium FTX Arena for the next 19 years.

Meanwhile, Bankman-Fried donated huge amounts of money to politics — including $5 million to Joe Biden’s 2020 presidential campaign. That splurge made “SBF,” as he’s known among crypto obsessives, the second largest money-giver to the president’s election effort.

According to Politico, during 2022, he contributed $105,000 to conservative candidates and $35,972,000 to liberals. Additionally, he contributed to Protect Our Future PAC, which began as a Democratic political action committee. It launched with $10 million in funding, most of which came from Bankman-Fried.

After publicly expressing a desire to donate “north of $100 million” for the next presidential election, Bankman-Fried later reconsidered and described his statement as a “dumb quote.”

Democrats did not hide their love for Bankman-Fried. In 2021, when the crypto guru was giving testimony for Congress on the subject of digital assets and the future of finance, Senator Cory Booker couldn’t help but say: “Mr. Bankman-Fried, I’m going to interrupt you because I’ve only got 30 seconds left and I’m offended that you have a much more glorious Afro than I once had.”

When it came to his own life, Bankman-Fried lived frugally. Though he could have sailed the world on a mega yacht or flown on his own 747, he chose to sleep on a beanbag next to his desk and drive a Toyota Corolla. He reportedly paid himself just 1% of profits — or around $100,000 per year.

One luxury Bankman-Fried allowed himself was a penthouse apartment in The Bahamas, which he shares with 10 roommates, including FTX co-founder and CTO Gary Wang and FTX Director of Engineering Nishad Singh.

According to CoinDesk, the others are all FTX employees that Bankman-Fried met at MIT or while working at the trading firm Jane Street — and all 10 “are, or used to be, paired up in romantic relationships with each other.” Among the group is Caroline Ellison, Bankman-Fried’s on-off girlfriend and the CEO of Alameda Research, a quantitative cryptocurrency trading firm founded by Bankman-Fried.

It was all smooth sailing for Bankman-Fried until Nov. 2, when crypto publication CoinDesk published some shocking news: the balance sheet of Alameda showed the company had $14.6 billion in assets—and $5.82 billion of those assets were FTT.

No one knows who leaked the document.

“While there is nothing per se wrong or untoward about that, it shows Bankman-Fried’s trading giant Alameda rests on a foundation largely made up of coin that its sister company invented, not an independent asset like a Fiat currency or another crypto,” CoinDesk wrote.

Four days later, the news spurred one of Bankman-Fried’s competitors into action.

Crypto billionaire Changpeng Zhao — known as “CZ” and the owner of rival crypto exchange Binance — made public that he would dump $580 million in FTT tokens.

This led other investors to panic and drop their tokens, leading to a sell-off that caused the price of FTTs to drop by 80% in two days.

On Tuesday, Bankman-Fried announced to employees that around $6 billion in cryptocurrency had been withdrawn, and because FTX was heavily leveraged in other investments, it could not make good on those withdrawals.

In other words, disaster.

On Thursday, Bankman-Fried tweeted that his mistake was a “poor internal labeling of bank-related accounts” leading to a big gap between leverage and liquidity.

“Which tells me a lot of things, both specifically and generally, that I was s–t at.”

Several representatives for the big-name celebrities claim the stars never invested their own funds in FTX, and only received pieces of the company as compensation — and therefore only lost “money” on paper. But one banker-turned-tech-exec sees it differently: “Assume every celebrity invested but people are too embarrassed to admit it now.”

Miami-Dade County, where the FTX Arena is based, also has egg on its face. A spokesman for the county, which negotiated the transaction, said they are ready to explore “all legal remedies” if FTX can’t meet its financial obligations and “is currently reviewing and gathering information about FTX’s financial situation and possible next steps,” according to Bloomberg Businessweek.

And Joe Biden has lost a backer, too.

“He was a big wallet for the Democrats that’s now dried up,” crypto investor Brock Pierce told The Post. “He doled out $55 million to [Democratic candidates] for the midterms.”

Financial world insiders fear that the collapse of FTX could even precipitate an entire meltdown of the US economy.

“We have no idea how far those tentacles extend,” one banker-turned-tech-exec told The Post.

“What’s happened with SBF is that he’s set the whole crypto industry back about five or ten years overnight,” Nick Bilton, author of “American Kingpin: The Epic Hunt for the Criminal Mastermind Behind Silk Road,” told The Post. “When crypto first came on the scene, it wasn’t reliable. People lost millions and billions in scams. Then exchanges like FTX and Coinbase came along and crypto had legitimacy.”

“Finance is built on trust,” added Bilton. “When people see someone like Sam light billions of money on fire, they back away.” 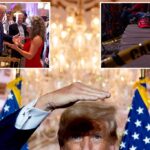 Trump voters are ‘done’ with ex-president: ‘He needs to disappear’ 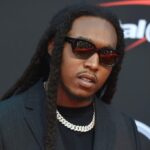 Migos rapper Takeoff’s memorial to be held Friday in Atlanta