While talking to Bollywood star Deepika Padukone during the Tuesday, October 11, episode of her “Archetypes” podcast, Meghan, 41, shared that Harry, 38, found her a referral to a mental health professional when she was struggling.

“I mean, I think at my worst point, being finally connected to someone that, you know, my husband had found a referral for me to call. And I called this woman,” the Duchess of Sussex said. “She didn’t know I was even calling her. And she was checking out at the grocery store. I could hear the little beep, beep, and I was like, ‘Hi,’ and I’m introducing myself and that you can literally you’re going, ‘Wait, sorry. I’m just. Who is this?’ Um, and saying I need help. And she could hear the dire state that I was in.”

She continued, “But I think it’s for all of us to be really honest about what it is that you need and to not be afraid to make peace with that, to ask for it.”

The podcast episode isn’t the first time Meghan has opened up about her struggles with mental health. In March 2021, the Suits alum reflected on the topic during an interview with Harry for CBS.

“I was ashamed to say it at the time and ashamed to have to admit it to Harry. But I knew that if I didn’t say it — then I would do it,” Meghan said at the time. “I just didn’t want to be alive anymore.”

She continued, “That was clear and real and frightening and constant thought.”

The mother of two went on to recall a conversation she had with Harry in January 2019, which took place when they attended a performance at Royal Albert Hall in London.

After noting photos from the event captured the couple tightly holding hands and smiling, she added, “We’re both just trying to hold on.”

Once inside of the theater, Meghan admitted she was “weeping” whenever the lights were turned off.

“And that’s I think so important for people to remember is you have no idea what’s going on for someone behind closed doors. No idea,” she said during the interview. “Even the people that smile and shine the brightest lights. You need to have compassion for what is actually potentially going on.”

Meghan has also been open about the difficulties she has faced as a member of the royal family. In January 2020, she and Harry announced their plans to step down from their senior royal duties and become “financially independent.”

“After many months of reflection and internal discussions, we have chosen to make a transition this year in starting to carve out a progressive new role within this institution,” the couple announced in the lengthy statement at the time. “We intend to step back as ‘senior’ members of the Royal Family and work to become financially independent, while continuing to fully support Her Majesty The Queen.”

Since leaving her senior royal duties behind, the California native has been open about the difficulties she faced during the tell-all CBS interview and on her podcast.

If you or someone you know is in emotional distress or considering suicide, call the National Suicide Prevention Lifeline at 1-800-273-TALK (8255). 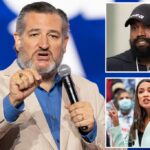 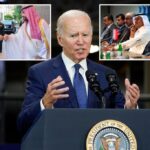