Despite being the only child of the late Elvis Presley, Lisa Marie Presley‘s net worth is surprisingly less than what his only heir should have for a fortune. Keep reading for details on how much money Lisa Marie has.

What Is Lisa Marie Presley’s Net Worth?

Elvis’ only daughter is valued at about $16 million, according to Celebrity Net Worth, and it has a lot to do with her father’s $100 million fortune she inherited at the time of his death. According to Lisa, she ran into financial troubles when she trusted her former business manager Barry Siegel with her cash.

How Did Lisa Marie Presley Lose Her Fortune?

After making some bad investments, the songwriter filed a lawsuit against Barry and his company, Provident Financial Management, for allegedly squandering her father’s fortune and leaving her with nothing but $14,000 in 2018. In the court documents, obtained by the Daily Mail, Lisa claims Barry was being “reckless and negligent” with her funds and making her invest in American Idol‘s holding company, which went bankrupt.

According to the musician, Barry gave her more than just bad advice. She claims he was using her money to pay himself an “average annual salary of $701,000 per year” when she was already losing money at a crazy rate. After Lisa became broke, she filed a lawsuit against Barry before he countersued her for a whopping $800,000 in damages.

Like Lisa, Barry believed that losing Elvis’ fortune had everything to do with the other party. He says Lisa “squandered” the money she got from her father’s estate because the entertainer had “uncontrollable spending habits” that forced her into financial ruin.

However, Lisa alleges Barry never gave her great advice on how to handle her money. “Had Barry disclosed the trust’s true financial condition to Lisa and restricted spending to the trust’s ‘income’ rather than its principal assets, Lisa would have lived comfortably on an annual budget of between $1.5 and $2 million per year, after taxes,” the documents read. “[But] Barry repeatedly led Lisa to believe she was in ‘good shape’ with her finances.”

Aside from her father’s estate, Lisa has made a good amount of cash on her three albums, Now What, Storm & Grace and To Whom It May Concern, which reached No. 5 on the Billboard 200 albums chart.

The “Over Me” singer has also accumulated some wealth managing Graceland, which is the “world’s largest and most comprehensive Elvis museum in the world,” according to the website. In 2006, Graceland was declared a National Historic Landmark and it’s also listed in the National Register of Historic Places. Although Lisa lost her father’s fortune, she’s doing right by Elvis by keeping his legacy alive. 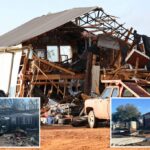 Tornadoes rip through Southern US, ‘signficant damages’ reported in Selma