WASHINGTON – The US avoided a government shutdown Friday as the House passed a Senate-approved stopgap bill that will continue funding federal agencies and provide another $12.35 billion in aid for Ukraine.

The 230-201 vote ensured federal operations will continue through Dec. 16, allowing more time for Congress to set spending levels for the 2023 fiscal year, which starts Saturday. The measure goes to President Biden for his signature.

Passage of the legislation allowed lawmakers to return home to campaign before the Nov. 8 midterm elections, which will determine who controls Congress for the next two years.

The Ukraine assistance includes $3 billion to purchase weapons and other military aid and training through the Ukraine Security Assistance Initiative as the country continues its more than seven-month war with Russia. About $1.5 billion will be spent to replace military equipment the Pentagon sent Ukraine from its own stocks.

“This bill guarantees that we have the means to continue the important work we are doing to help middle class and working families with the cost of living, support vulnerable Americans by keeping roofs over the heads of millions of families and food on their tables, uphold our commitment to our veterans and strengthen our national security,” said House Committee on Appropriations chair Rep. Rosa DeLauro, D-Conn.

Also included in the legislation is millions of dollars in funding to address devastation from natural disasters and extreme weather events. Part of that funding includes $20 million for Army Corps of Engineers projects to fix an ongoing Jackson, Miss. water crisis and upgrade the city’s water and wastewater infrastructure, DeLauro said.

“In the wealthiest nation in the world, the bare minimum every person deserves is drinking water that is clean and safe,” she said. “This bill gets us one step closer to that minimum.”

About $1 billion of the bill’s funds will be earmarked for the Low Income Home Energy Assistance Program, which helps lower-income families cover energy costs of heating and cooling.

Biden’s request of billions of dollars to fund COVID-19 and monkeypox research and vaccine development to prepare for future coronavirus variants was left out of the bill after Republicans called the health spending unnecessary.

The Senate approved the bill by a vote of 72-25 Thursday after Democratic Sen. Joe Manchin dropped his effort to tie energy projects to the legislation. Earlier, he had proposed a contentious amendment that would have tied in a provision to speed the permitting process for the 303-mile Mountain Valley natural gas pipeline between his home state of West Virginia and Virginia. 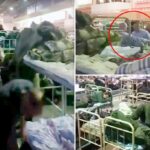